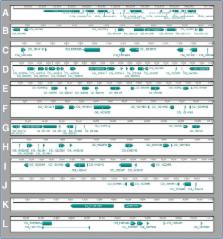 The re-sequencing of C. angulata has revealed many polymorphisms in candidate genes related to adaptation to abiotic stress that are not present in C. gigas; these genes, therefore, are probably related to the ability of this oyster to retain high concentrations of toxic heavy metals. There is, in addition, an unresolved controversy as to whether or not C. angulata and C. gigas are the same species or subspecies. Both oysters have 20 metacentric chromosomes of similar size that are morphologically indistinguishable. From a genomic perspective, as a result of the great variation and selection for heterozygotes in C. gigas, the assembly of its draft genome was difficult: it is fragmented in more than seven thousand scaffolds.

In this work sixty BAC sequences of C. gigas downloaded from NCBI were assembled in BAC-contigs and assigned to BACs that were used as probes for mFISH in C. angulata and C. gigas. In addition, probes of H3, H4 histone, 18S and 5S rDNA genes were also used. Hence we obtained markers identifying 8 out the 10 chromosomes constituting the karyotype. Chromosomes 1 and 9 can be distinguished morphologically. The bioinformatic analysis carried out with the BAC-contigs annotated 88 genes. As a result, genes associated with abiotic adaptation, such as metallothioneins, have been positioned in the genome. The gene ontology analysis has also shown many molecular functions related to metal ion binding, a phenomenon associated with detoxification processes that are characteristic in oysters. Hence the provisional integrated map obtained in this study is a useful complementary tool for the study of oyster genomes.

In this study 8 out of 10 chromosome pairs of Crassostrea angulata/gigas were identified using BAC clones as probes. As a result all chromosomes can now be distinguished. Moreover, FISH showed that H3 and H4 co-localized in two pairs of chromosomes different that those previously escribed. 88 genes were annotated in the BAC-contigs most of them related with Molecular Functions of protein binding, related to the resistance of the species to abiotic stress. An integrated genetic map anchored to the genome has been obtained in which the BAC-contigs structure were not concordant with the gene structure of the C. gigas scaffolds displayed in the Genomicus database.

An Integrated Genetic and Cytogenetic Map of the Cucumber Genome

YI-MING REN,  Zhonghua Zhang,  Jinhua Liu … (2009)
The Cucurbitaceae includes important crops such as cucumber, melon, watermelon, squash and pumpkin. However, few genetic and genomic resources are available for plant improvement. Some cucurbit species such as cucumber have a narrow genetic base, which impedes construction of saturated molecular linkage maps. We report herein the development of highly polymorphic simple sequence repeat (SSR) markers originated from whole genome shotgun sequencing and the subsequent construction of a high-density genetic linkage map. This map includes 995 SSRs in seven linkage groups which spans in total 573 cM, and defines ∼680 recombination breakpoints with an average of 0.58 cM between two markers. These linkage groups were then assigned to seven corresponding chromosomes using fluorescent in situ hybridization (FISH). FISH assays also revealed a chromosomal inversion between Cucumis subspecies [C. sativus var. sativus L. and var. hardwickii (R.) Alef], which resulted in marker clustering on the genetic map. A quarter of the mapped markers showed relatively high polymorphism levels among 11 inbred lines of cucumber. Among the 995 markers, 49%, 26% and 22% were conserved in melon, watermelon and pumpkin, respectively. This map will facilitate whole genome sequencing, positional cloning, and molecular breeding in cucumber, and enable the integration of knowledge of gene and trait in cucurbits.