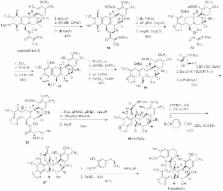 Marine invertebrates provide a rich source of metabolites with anticancer activities and several marine-derived agents have been approved for the treatment of cancer. However, the limited supply of promising anticancer metabolites from their natural sources is a major hurdle to their preclinical and clinical development. Thus, the lack of a sustainable large-scale supply has been an important challenge facing chemists and biologists involved in marine-based drug discovery. In the current review we describe the main strategies aimed to overcome the supply problem. These include: marine invertebrate aquaculture, invertebrate and symbiont cell culture, culture-independent strategies, total chemical synthesis, semi-synthesis, and a number of hybrid strategies. We provide examples illustrating the application of these strategies for the supply of marine invertebrate-derived anticancer agents. Finally, we encourage the scientific community to develop scalable methods to obtain selected metabolites, which in the authors’ opinion should be pursued due to their most promising anticancer activities.

Jo Handelsman (2004)
Metagenomics (also referred to as environmental and community genomics) is the genomic analysis of microorganisms by direct extraction and cloning of DNA from an assemblage of microorganisms. The development of metagenomics stemmed from the ineluctable evidence that as-yet-uncultured microorganisms represent the vast majority of organisms in most environments on earth. This evidence was derived from analyses of 16S rRNA gene sequences amplified directly from the environment, an approach that avoided the bias imposed by culturing and led to the discovery of vast new lineages of microbial life. Although the portrait of the microbial world was revolutionized by analysis of 16S rRNA genes, such studies yielded only a phylogenetic description of community membership, providing little insight into the genetics, physiology, and biochemistry of the members. Metagenomics provides a second tier of technical innovation that facilitates study of the physiology and ecology of environmental microorganisms. Novel genes and gene products discovered through metagenomics include the first bacteriorhodopsin of bacterial origin; novel small molecules with antimicrobial activity; and new members of families of known proteins, such as an Na(+)(Li(+))/H(+) antiporter, RecA, DNA polymerase, and antibiotic resistance determinants. Reassembly of multiple genomes has provided insight into energy and nutrient cycling within the community, genome structure, gene function, population genetics and microheterogeneity, and lateral gene transfer among members of an uncultured community. The application of metagenomic sequence information will facilitate the design of better culturing strategies to link genomic analysis with pure culture studies.

Molecular evidence for a uniform microbial community in sponges from different oceans.

Erik B Friedrich,  Michael Wagner,  R. Moore … (2002)
Sponges (class Porifera) are evolutionarily ancient metazoans that populate the tropical oceans in great abundances but also occur in temperate regions and even in freshwater. Sponges contain large numbers of bacteria that are embedded within the animal matrix. The phylogeny of these bacteria and the evolutionary age of the interaction are virtually unknown. In order to provide insights into the species richness of the microbial community of sponges, we performed a comprehensive diversity survey based on 190 sponge-derived 16S ribosomal DNA (rDNA) sequences. The sponges Aplysina aerophoba and Theonella swinhoei were chosen for construction of the bacterial 16S rDNA library because they are taxonomically distantly related and they populate nonoverlapping geographic regions. In both sponges, a uniform microbial community was discovered whose phylogenetic signature is distinctly different from that of marine plankton or marine sediments. Altogether 14 monophyletic, sponge-specific sequence clusters were identified that belong to at least seven different bacterial divisions. By definition, the sequences of each cluster are more closely related to each other than to a sequence from nonsponge sources. These monophyletic clusters comprise 70% of all publicly available sponge-derived 16S rDNA sequences, reflecting the generality of the observed phenomenon. This shared microbial fraction represents the smallest common denominator of the sponges investigated in this study. Bacteria that are exclusively found in certain host species or that occur only transiently would have been missed. A picture emerges where sponges can be viewed as highly concentrated reservoirs of so far uncultured and elusive marine microorganisms.