Calcipotriol/betamethasone dipropionate in the treatment of psoriasis vulgaris 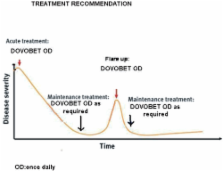 Psoriasis is one of the most common skin diseases. The mainstay of treatment for the vast majority of patients is topical therapy. A rising first-line treatment modality for psoriasis vulgaris is the two-compound ointment containing calcipotriol 50 μg/g plus betamethasone dipropionate 0.5 mg/g (Dovobet ®, Daivobet ®, Taclonex ®), which combines a vitamin D analog and a corticosteroid. This innovative formulation preserves the activity and bioavailability of the two components and many clinical studies have demonstrated that it has a greater efficacy, tolerability, and a rapid onset of action compared with its individual ingredients or tacalcitol.

E Christophers (2001)
Despite psoriasis being a common skin disease, there are still a number of unanswered questions. One of these is the prevalence of the disease, as there is a lack of specific data, with the majority of studies reporting estimates only. Population based studies are rare and longitudinal observations on changing prevalence rates are lacking. This contrasts with other T-cell mediated autoimmune diseases where the number of those affected is rising. Epidemiological studies revealed that a distinct group of diseases is quite frequently associated with psoriasis, e.g. arthritis, colitis, diabetes and hypertension. In contrast, atopic dermatitis and allergies are less frequently seen compared to normal rates of occurrence. As the psoriatic immune response pattern relates to activated Th-1 cells, psoriasis and atopic dermatitis appear to be mutually exclusive due to the Th-1/Th-2 dichotomy.

Mark G. Lebwohl (2003)
Recent breakthroughs in the treatment of psoriasis have led to improved understanding of the pathogenesis of this disease. Activation of T lymphocytes leading to release of cytokines results in proliferation of keratinocytes. Several new biological therapies have been developed, which target specific steps in the pathogenesis of psoriasis. With these new treatments, variable degrees of clearing occur. Initial data suggest improved safety over older agents such as methotrexate and ciclosporin, but long-term data are necessary. Enhancements in topical therapy and phototherapy have also increased the armamentarium of treatments available for this disorder.

A’ Department of Dermatology, Aristotle University of Thessaloniki Greece