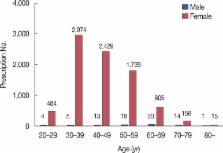 Lack of awareness, the stigma of carrying a genetic mutation, and economic factors are barriers to acceptance of BRCA genetic testing or appropriate risk management. We aimed to investigate the influence of Angelina Jolie's announcement of her medical experience and also health insurance reimbursement for BRCA gene testing on practice patterns for hereditary breast and ovarian cancer (HBOC). A survey regarding changes in practice patterns for HBOC before and after the announcement was conducted online. The rate of BRCA gene testing was obtained from the National Health Insurance Review and Assessment Service database. From May to August 2016, 70 physicians responded to the survey. Genetic testing recommendations and prophylactic management were increased after the announcement. Risk-reducing salpingo-oophorectomy and contralateral prophylactic mastectomy was significantly increased in BRCA carriers with breast cancer. The BRCA testing rate increased annually. Health insurance and a celebrity announcement were associated with increased genetic testing.

S Tavtigian,  B Bogden,  Gordon Daly … (1996)
The breast cancer susceptibility gene, BRCA2 on chromosome 13q12-13, was recently isolated. Mutations in BRCA2 are thought to account for as much as 35% of all inherited breast cancer as wall as a proportion of inherited ovarian cancer. Many BRCA2-linked families also contain cases of male breast cancer. We have analysed germline DNA from 50 males with breast cancer (unselected for family history) and 26 individuals from site-specific female breast and breast-ovarian cancer families for mutations in BRCA2. All 17 breast-ovarian cancer families have been screened for BRCA1 coding region mutations and none were detected. Conformation-sensitive gel electrophoresis (CSGE) analysis of PCR-amplified DNA followed by direct sequencing was used to detect sequence variants. Three of eleven individuals carry the same mutation, all are of Ashkenazi Jewish descent, supporting the observation by Neuhausen et al. in this issue that there is a common mutation in this population. Eleven truncating mutations and nine polymorphisms were identified -- all were coding region variants. No loss-of-transcript mutations were identified in the sixteen samples for which this analysis was possible. Seven of the nine disease-associated mutations were detected in the 50 men with breast cancers; for thus in our series, BRCA2 mutations account for 14% of male breast cancer, all but one of which had a family history of male and/or female breast cancer.

D. Gareth Evans,  Julie Wisely,  Tara Clancy … (2015)
In May 2013 the actress Angelina Jolie informed the press that she had undergone bilateral risk-reducing mastectomy (BRRM) because she carried a maternally inherited pathogenic BRCA1 mutation. This decision created huge publicity worldwide [1] and led to enormous interest in hereditary breast cancer/genetic testing. Here we comment on our recently published research article in Breast Cancer Research and provide more recent observations. This reported a 2.5-fold increase in referrals of UK women with family histories of breast cancer 3–4 months following Ms Jolie’s revelation [1]. We also highlighted increased interest in BRRM; however, as it takes 9–12 months from initial BRRM enquiries to the operative procedure, we can now report a similar 2.5-fold increase in uptake of BRRM in the 6–24 months following this. The Genesis Prevention Centre Family History clinic (GPCFHC) covers an extended population of around 5 million. Although the main impact of the Angelina effect was from June to November 2013, this trend continued through 2014 with increased referrals from 201 in January–June 2012 to 388 (odds ratio (OR) 1.93) in January to June 2014 and rising by 366 (OR 2.09) for the last 6 months to give a total of 754 for 2014. Women attending for risk assessment and discussions concerning BRRM, unprompted, still mention the effects of Angelina Jolie on their attendance anecdotally to clinic physicians and still reflect on the impact of her speaking publicly in their pre-surgery consultations with the clinical psychologist in 2015. A clear upward trend in BRRM can be seen starting around 6 months after the news announcement in May 2013 (Fig. 1). The number of high-risk women without BRCA1/2 mutations undergoing BRRM (n = 12; 18 months from January 2011) rose to 52 (18 months from January 2014). The number in mutation carriers rose from 17 to 31. The overall combined rise from 29 BRRMs to 83 was significant (high-risk women at GPCFHC, n = 2012; chi-square p  18 months after testing positive, indicating a delay in decision-making, whereas prior to 2013 the majority of women had BRRM within 18 months of testing positive [2]. There was a slight rise in the number of unaffected women newly testing positive for BRCA1/2 in Manchester from 81 to 116 in the 2 years before and the 2 years after Angelina’s announcement, although this could have been impacted by new National Institute for Health and Care Excellence (NICE) guidelines announced in June 2013 [3]. This research was exempt from ethical approval as this is an audit of clinical service and does not contain identifiable data. Fig. 1 Number of BRRMs carried out at Wythenshawe and Christie hospitals per 6-month period from 2011 and proportion with mutations in high-risk genes. a January–June, b July–December, red proportion with BRCA1/2/TP53 mutations, BRRM bilateral risk-reducing mastectomy The present audit of further new referrals and BRRM rates indicates that the Angelina effect has been prolonged and has impacted on increased referral and BRRM rates. It would be interesting to see results from centres worldwide. Plans to offer breast cancer risk assessment on a population basis could further affect uptake of BRRM [4]. It is also possible that similar effects will be seen on the already increasing rates of contralateral mastectomy in women with breast cancer [5].