Regulation of RhoGTPase crosstalk, degradation and activity by RhoGDI1 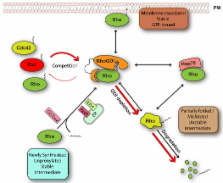 At steady state, most Rho GTPases are bound in the cytosol to Rho Guanine nucleotide Dissociation Inhibitors (RhoGDI) 1. RhoGDIs have generally been considered to passively hold Rho proteins in an inactive state within the cytoplasm. Here we describe an evolutionarily conserved mechanism by which RhoGDI1 controls the homeostasis of Rho proteins in eukaryotic cells. We found that depletion of RhoGDI1 promotes misfolding and degradation of the cytosolic geranylgeranylated pool of Rho GTPases while unexpectedly activating the remaining membrane-bound fraction. Since RhoGDI1 levels are limiting, and Rho proteins compete for binding to RhoGDI1, overexpression of an exogenous Rho GTPase displaces endogenous Rho proteins bound to RhoGDI1, inducing their degradation and inactivation. These results raise important questions about the conclusions drawn from studies that manipulate Rho protein levels. In many cases the response observed may arise not simply from the overexpression per se, but from additional effects on the levels and activity of other Rho GTPases due to competition for binding to RhoGDI1, and may require a re-evaluation of previously published studies that rely exclusively on these techniques.

Regulation of the small GTP-binding protein Rho by cell adhesion and the cytoskeleton.

Rebecca Schwartz,  Shun X. Ren,  William Kiosses … (1999)
Soluble factors from serum such as lysophosphatidic acid (LPA) are thought to activate the small GTP-binding protein Rho based on their ability to induce actin stress fibers and focal adhesions in a Rho-dependent manner. Cell adhesion to extracellular matrices (ECM) has also been proposed to activate Rho, but this point has been controversial due to the difficulty of distinguishing changes in Rho activity from the structural contributions of ECM to the formation of focal adhesions. To address these questions, we established an assay for GTP-bound cellular Rho. Plating Swiss 3T3 cells on fibronectin-coated dishes elicited a transient inhibition of Rho, followed by a phase of Rho activation. The activation phase was greatly enhanced by serum. In serum-starved adherent cells, LPA induced transient Rho activation, whereas in suspended cells Rho activation was sustained. Furthermore, suspended cells showed higher Rho activity than adherent cells in the presence of serum. These data indicate the existence of an adhesion-dependent negative-feedback loop. We also observed that both cytochalasin D and colchicine trigger Rho activation despite their opposite effects on stress fibers and focal adhesions. Our results show that ECM, cytoskeletal structures and soluble factors all contribute to regulation of Rho activity.

Pathways of chaperone-mediated protein folding in the cytosol.

Katja Siegers,  F. Ulrich Hartl,  Vrushali Agashe … (2004)
Cells are faced with the task of folding thousands of different polypeptides into a wide range of conformations. For many proteins, the folding process requires the action of molecular chaperones. In the cytosol of prokaryotic and eukaryotic cells, molecular chaperones of different structural classes form a network of pathways that can handle substrate polypeptides from the point of initial synthesis on ribosomes to the final stages of folding.

Genomic analysis of metastasis reveals an essential role for RhoC.

E Lander,  Elizabeth T. Golub,  Thomas Hynes … (2000)
The most damaging change during cancer progression is the switch from a locally growing tumour to a metastatic killer. This switch is believed to involve numerous alterations that allow tumour cells to complete the complex series of events needed for metastasis. Relatively few genes have been implicated in these events. Here we use an in vivo selection scheme to select highly metastatic melanoma cells. By analysing these cells on DNA arrays, we define a pattern of gene expression that correlates with progression to a metastatic phenotype. In particular, we show enhanced expression of several genes involved in extracellular matrix assembly and of a second set of genes that regulate, either directly or indirectly, the actin-based cytoskeleton. One of these, the small GTPase RhoC, enhances metastasis when overexpressed, whereas a dominant-negative Rho inhibits metastasis. Analysis of the phenotype of cells expressing dominant-negative Rho or RhoC indicates that RhoC is important in tumour cell invasion. The genomic approach allows us to identify families of genes involved in a process, not just single genes, and can indicate which molecular and cellular events might be important in complex biological processes such as metastasis.