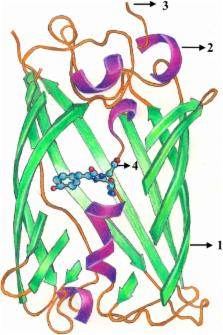 Green Fluorescent protein (GFP), used as a cellular tag, provides researchers with a valuable method of measuring gene expression and cell tracking. However, there is evidence to suggest that the immunogenicity and cytotoxicity of GFP potentially confounds the interpretation of in vivo experimental data. Studies have shown that GFP expression can deteriorate over time as GFP tagged cells are prone to death. Therefore, the cells that were originally marked with GFP do not survive and cannot be accurately traced over time. This review will present current evidence for the immunogenicity and cytotoxicity of GFP in in vivo studies by characterizing these responses.

Nathan Shaner,  Jane W. Davidson,  L D Hazelwood … (2008)
All organic fluorophores undergo irreversible photobleaching during prolonged illumination. Although fluorescent proteins typically bleach at a substantially slower rate than many small-molecule dyes, in many cases the lack of sufficient photostability remains an important limiting factor for experiments requiring large numbers of images of single cells. Screening methods focusing solely on brightness or wavelength are highly effective in optimizing both properties, but the absence of selective pressure for photostability in such screens leads to unpredictable photobleaching behavior in the resulting fluorescent proteins. Here we describe an assay for screening libraries of fluorescent proteins for enhanced photostability. With this assay, we developed highly photostable variants of mOrange (a wavelength-shifted monomeric derivative of DsRed from Discosoma sp.) and TagRFP (a monomeric derivative of eqFP578 from Entacmaea quadricolor) that maintain most of the beneficial qualities of the original proteins and perform as reliably as Aequorea victoria GFP derivatives in fusion constructs.

Fusion of bone-marrow-derived cells with Purkinje neurons, cardiomyocytes and hepatocytes.

Arturo Alvarez,  Liam J. Morrison,  Klaus Pfeffer … (2003)
Recent studies have suggested that bone marrow cells possess a broad differentiation potential, being able to form new liver cells, cardiomyocytes and neurons. Several groups have attributed this apparent plasticity to 'transdifferentiation'. Others, however, have suggested that cell fusion could explain these results. Using a simple method based on Cre/lox recombination to detect cell fusion events, we demonstrate that bone-marrow-derived cells (BMDCs) fuse spontaneously with neural progenitors in vitro. Furthermore, bone marrow transplantation demonstrates that BMDCs fuse in vivo with hepatocytes in liver, Purkinje neurons in the brain and cardiac muscle in the heart, resulting in the formation of multinucleated cells. No evidence of transdifferentiation without fusion was observed in these tissues. These observations provide the first in vivo evidence for cell fusion of BMDCs with neurons and cardiomyocytes, raising the possibility that cell fusion may contribute to the development or maintenance of these key cell types.

Pei-Xi Wang,  Anthony Russell,  Hai-rong Wang … (2003)
Results from several experimental systems suggest that cells from one tissue type can form other tissue types after transplantation. This could be due to the presence of multipotential or several types of adult stem cells in donor tissues, or alternatively, to fusion of donor and recipient cells. In a model of tyrosinaemia type I, mice with mutations in the fumarylacetoacetate hydrolase gene (Fah-/-) regain normal liver function after transplantation of Fah+/+ bone marrow cells, and form regenerating liver nodules with normal histology that express Fah. Here we show that these hepatic nodules contain more mutant than wild-type Fah alleles, and that their hepatocytes express both donor and host genes, consistent with polyploid genome formation by fusion of host and donor cells. Using bone marrow cells marked with integrated foamy virus vectors that express green fluorescent protein, we identify common proviral junctions in hepatic nodules and haematopoietic cells. We also show that the haematopoietic donor genome adopts a more hepatocyte-specific expression profile after cell fusion, as the wild-type Fah gene was activated and the pan-haematopoietic CD45 marker was no longer expressed.