Expression of a Deschampsia antarctica Desv. Polypeptide with Lipase Activity in a Pichia pastoris Vector 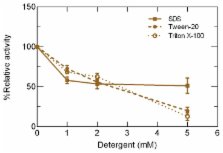 The current study isolated and characterized the Lip3F9 polypeptide sequence of Deschampsia antarctica Desv. (GeneBank Accession Number JX846628), which was found to be comprised of 291 base pairs and was, moreover, expressed in Pichia pastoris X-33 cells. The enzyme was secreted after 24 h of P. pastoris culture incubation and through induction with methanol. The expressed protein showed maximum lipase activity (35 U/L) with an optimal temperature of 37 °C. The lipase-expressed enzyme lost 50% of its specific activity at 25 °C, a behavior characteristic of a psychrotolerant enzyme. Recombinant enzyme activity was measured in the presence of ionic and non-ionic detergents, and a decrease in enzyme activity was detected for all concentrations of ionic and non-ionic detergents assessed.

Hanna Chepyshko,  Chia-Ping Lai,  LI-MING HUANG … (2012)
Background GDSL esterases/lipases are a newly discovered subclass of lipolytic enzymes that are very important and attractive research subjects because of their multifunctional properties, such as broad substrate specificity and regiospecificity. Compared with the current knowledge regarding these enzymes in bacteria, our understanding of the plant GDSL enzymes is very limited, although the GDSL gene family in plant species include numerous members in many fully sequenced plant genomes. Only two genes from a large rice GDSL esterase/lipase gene family were previously characterised, and the majority of the members remain unknown. In the present study, we describe the rice OsGELP (Oryza sativa GDSL esterase/lipase protein) gene family at the genomic and proteomic levels, and use this knowledge to provide insights into the multifunctionality of the rice OsGELP enzymes. Results In this study, an extensive bioinformatics analysis identified 114 genes in the rice OsGELP gene family. A complete overview of this family in rice is presented, including the chromosome locations, gene structures, phylogeny, and protein motifs. Among the OsGELPs and the plant GDSL esterase/lipase proteins of known functions, 41 motifs were found that represent the core secondary structure elements or appear specifically in different phylogenetic subclades. The specification and distribution of identified putative conserved clade-common and -specific peptide motifs, and their location on the predicted protein three dimensional structure may possibly signify their functional roles. Potentially important regions for substrate specificity are highlighted, in accordance with protein three-dimensional model and location of the phylogenetic specific conserved motifs. The differential expression of some representative genes were confirmed by quantitative real-time PCR. The phylogenetic analysis, together with protein motif architectures, and the expression profiling were analysed to predict the possible biological functions of the rice OsGELP genes. Conclusions Our current genomic analysis, for the first time, presents fundamental information on the organization of the rice OsGELP gene family. With combination of the genomic, phylogenetic, microarray expression, protein motif distribution, and protein structure analyses, we were able to create supported basis for the functional prediction of many members in the rice GDSL esterase/lipase family. The present study provides a platform for the selection of candidate genes for further detailed functional study.

Exploring the specific features of interfacial enzymology based on lipase studies.

Frédéric Carrière,  Ahmed Aloulou,  Dirk Van Gansbeke … (2006)
Many enzymes are active at interfaces in the living world (such as in the signaling processes at the surface of cell membranes, digestion of dietary lipids, starch and cellulose degradation, etc.), but fundamental enzymology remains largely focused on the interactions between enzymes and soluble substrates. The biochemical and kinetic characterization of lipolytic enzymes has opened up new paths of research in the field of interfacial enzymology. Lipases are water-soluble enzymes hydrolyzing insoluble triglyceride substrates, and studies on these enzymes have led to the development of specific interfacial kinetic models. Structure-function studies on lipases have thrown light on the interfacial recognition sites present in the molecular structure of these enzymes, the conformational changes occurring in the presence of lipids and amphiphiles, and the stability of the enzymes present at interfaces. The pH-dependent activity, substrate specificity and inhibition of these enzymes can all result from both "classical" interactions between a substrate or inhibitor and the active site, as well as from the adsorption of the enzymes at the surface of aggregated substrate particles such as oil drops, lipid bilayers or monomolecular lipid films. The adsorption step can provide an alternative target for improving substrate specificity and developing specific enzyme inhibitors. Several data obtained with gastric lipase, classical pancreatic lipase, pancreatic lipase-related protein 2 and phosphatidylserine-specific phospholipase A1 were chosen here to illustrate these specific features of interfacial enzymology.

Hua Ling (2008)
To analyze sequence characters of GDSL lipase gene family in Arabidopsis thaliana, 108 members of GDSL lipases were analyzed using data mining. The gene structures display remarkable diversity, consisting of zero to 13 introns. And the genes are asymmetrically distributed in chromosome 1-5, some of which are arranged in tandem. Phylogenetically, they were classified into three groups. Lipase-GDSL domain (PF00478) is housed at or close to N-terminus, or in the middle of amino acid sequences, additionally in which other domains and replicates were also found. Most GDSL lipases contain a signal peptide for conducting the secretary pathway. They are predicted to be extracellularly secreted, or target to mitochondria, chloroplast or any other parts of the cells. Functionally, these lipases are potentially involved in multiple physiological roles including seed germination, flowering and defense reactions. This study will help further understand the sequences and functions of Arabidopsis GDSL lipases.