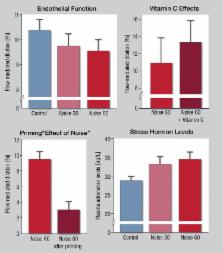 The role of noise as an environmental pollutant and its impact on health are being increasingly recognized. Beyond its effects on the auditory system, noise causes annoyance and disturbs sleep, and it impairs cognitive performance. Furthermore, evidence from epidemiologic studies demonstrates that environmental noise is associated with an increased incidence of arterial hypertension, myocardial infarction, and stroke. Both observational and experimental studies indicate that in particular night-time noise can cause disruptions of sleep structure, vegetative arousals (e.g. increases of blood pressure and heart rate) and increases in stress hormone levels and oxidative stress, which in turn may result in endothelial dysfunction and arterial hypertension. This review focuses on the cardiovascular consequences of environmental noise exposure and stresses the importance of noise mitigation strategies for public health.

Associations between sleep loss and increased risk of obesity and diabetes.

Kristen Knutson, Eve Van Cauter (2008)
During the past few decades, sleep curtailment has become a very common in industrialized countries. This trend for shorter sleep duration has developed over the same time period as the dramatic increase in the prevalence of obesity and diabetes. Evidence is rapidly accumulating to indicate that chronic partial sleep loss may increase the risk of obesity and diabetes. Laboratory studies in healthy volunteers have shown that experimental sleep restriction is associated with an adverse impact on glucose homeostasis. Insulin sensitivity decreases rapidly and markedly without adequate compensation in beta cell function, resulting in an elevated risk of diabetes. Prospective epidemiologic studies in both children and adults are consistent with a causative role of short sleep in the increased risk of diabetes. Sleep curtailment is also associated with a dysregulation of the neuroendocrine control of appetite, with a reduction of the satiety factor, leptin, and an increase in the hunger-promoting hormone, ghrelin. Thus, sleep loss may alter the ability of leptin and ghrelin to accurately signal caloric need, acting in concert to produce an internal misperception of insufficient energy availability. The adverse impact of sleep deprivation on appetite regulation is likely to be driven by increased activity in neuronal populations expressing the excitatory peptides orexins that promote both waking and feeding. Consistent with the laboratory evidence, multiple epidemiologic studies have shown an association between short sleep and higher body mass index after controlling for a variety of possible confounders.

Annoyance from transportation noise: relationships with exposure metrics DNL and DENL and their confidence intervals.

H M Miedema, C Oudshoorn (2001)
We present a model of the distribution of noise annoyance with the mean varying as a function of the noise exposure. Day-night level (DNL) and day-evening-night level (DENL) were used as noise descriptors. Because the entire annoyance distribution has been modeled, any annoyance measure that summarizes this distribution can be calculated from the model. We fitted the model to data from noise annoyance studies for aircraft, road traffic, and railways separately. Polynomial approximations of relationships implied by the model for the combinations of the following exposure and annoyance measures are presented: DNL or DENL, and percentage "highly annoyed" (cutoff at 72 on a scale of 0-100), percentage "annoyed" (cutoff at 50 on a scale of 0-100), or percentage (at least) "a little annoyed" (cutoff at 28 on a scale of 0-100). These approximations are very good, and they are easier to use for practical calculations than the model itself, because the model involves a normal distribution. Our results are based on the same data set that was used earlier to establish relationships between DNL and percentage highly annoyed. In this paper we provide better estimates of the confidence intervals due to the improved model of the relationship between annoyance and noise exposure. Moreover, relationships using descriptors other than DNL and percentage highly annoyed, which are presented here, have not been established earlier on the basis of a large dataset.

The quantitative relationship between road traffic noise and hypertension: a meta-analysis.

Jiska C. E. Kempen, Wolfgang Babisch (2012)
Reviews have suggested that road noise exposure is associated with high blood pressure (hypertension). No reliable exposure-response relationship is as yet available. A meta-analysis was carried out in order to derive a quantitative exposure-response relationship between the exposure to road traffic noise and the prevalence of hypertension, and to gain some insight into the sources of heterogeneity among study results. Twenty-seven observational studies published between 1970 and 2010 in English, German or Dutch, were evaluated. Finally, the results of 24 studies were included into the data aggregation. Road traffic noise was positively and significantly associated with hypertension: Data aggregation revealed an odds ratio (OR) of 1.034 [95% confidence interval (CI) 1.011-1.056] per 5 dB(A) increase of the 16 h average road traffic noise level (LAeq16hr) [range 45-75 dB(A)]. Important sources of heterogeneity were the age and sex of the population under study, the way exposure was ascertained, and the noise reference level used. Also the way noise was treated in the statistical model and the minimum years of residence of the population under study, gave an explanation of the observed heterogeneity. No definite conclusions can be drawn about the threshold value for the relationship between road traffic noise and the prevalence of hypertension. Based on the meta-analysis, a quantitative relationship is derived that can be used for health impact assessment. The results of this meta-analysis are consistent with a slight increase of cardiovascular disease risk in populations exposed to transportation noise.

This is an Open Access article distributed under the terms of the Creative Commons Attribution Non-Commercial License ( http://creativecommons.org/licenses/by-nc/3.0/), which permits non-commercial re-use, distribution, and reproduction in any medium, provided the original work is properly cited. For commercial re-use, please contact journals.permissions@ 123456oup.com