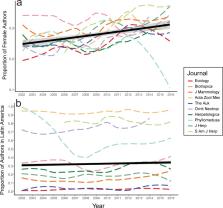 Representation of women in science drops substantially at each career stage, from early student to senior investigator. Disparities in opportunities for women to contribute to research metrics, such as distinguished speaker events and authorship, have been reported in many fields in the U.S.A. and Europe. However, whether female representation in scientific contributions differs in other regions, such as Latin America, is not well understood. In this study, in order to determine whether female authorship is influenced by gender or institutional location of the last (senior) author or by subfield within ecology, we gathered author information from 6849 articles in ten ecological and zoological journals that publish research articles either in or out of Latin America. We found that female authorship has risen marginally since 2002 (27 to 31%), and varies among Latin American countries, but not between Latin America and other regions. Last author gender predicted female co-authorship across all journals and regions, as research groups led by women published with over 60% female co-authors whereas those led by men published with less than 20% female co-authors. Our findings suggest that implicit biases and stereotype threats that women face in male-led laboratories could be sources of female withdrawal and leaky pipelines in ecology and zoology. Accordingly, we encourage every PI to self-evaluate their lifetime percentage of female co-authors. Female role models and cultural shifts–especially by male senior authors–are crucial for female retention and unbiased participation in science.

A threat in the air. How stereotypes shape intellectual identity and performance.

C Steele (1997)
A general theory of domain identification is used to describe achievement barriers still faced by women in advanced quantitative areas and by African Americans in school. The theory assumes that sustained school success requires identification with school and its subdomains; that societal pressures on these groups (e.g., economic disadvantage, gender roles) can frustrate this identification; and that in school domains where these groups are negatively stereotyped, those who have become domain identified face the further barrier of stereotype threat, the threat that others' judgments or their own actions will negatively stereotype them in the domain. Research shows that this threat dramatically depresses the standardized test performance of women and African Americans who are in the academic vanguard of their groups (offering a new interpretation of group differences in standardized test performance), that it causes disidentification with school, and that practices that reduce this threat can reduce these negative effects.

Stephen J. Ceci, Donna K. Ginther, Shulamit Kahn … (2014)
Much has been written in the past two decades about women in academic science careers, but this literature is contradictory. Many analyses have revealed a level playing field, with men and women faring equally, whereas other analyses have suggested numerous areas in which the playing field is not level. The only widely-agreed-upon conclusion is that women are underrepresented in college majors, graduate school programs, and the professoriate in those fields that are the most mathematically intensive, such as geoscience, engineering, economics, mathematics/computer science, and the physical sciences. In other scientific fields (psychology, life science, social science), women are found in much higher percentages. In this monograph, we undertake extensive life-course analyses comparing the trajectories of women and men in math-intensive fields with those of their counterparts in non-math-intensive fields in which women are close to parity with or even exceed the number of men. We begin by examining early-childhood differences in spatial processing and follow this through quantitative performance in middle childhood and adolescence, including high school coursework. We then focus on the transition of the sexes from high school to college major, then to graduate school, and, finally, to careers in academic science. The results of our myriad analyses reveal that early sex differences in spatial and mathematical reasoning need not stem from biological bases, that the gap between average female and male math ability is narrowing (suggesting strong environmental influences), and that sex differences in math ability at the right tail show variation over time and across nationalities, ethnicities, and other factors, indicating that the ratio of males to females at the right tail can and does change. We find that gender differences in attitudes toward and expectations about math careers and ability (controlling for actual ability) are evident by kindergarten and increase thereafter, leading to lower female propensities to major in math-intensive subjects in college but higher female propensities to major in non-math-intensive sciences, with overall science, technology, engineering, and mathematics (STEM) majors at 50% female for more than a decade. Post-college, although men with majors in math-intensive subjects have historically chosen and completed PhDs in these fields more often than women, the gap has recently narrowed by two thirds; among non-math-intensive STEM majors, women are more likely than men to go into health and other people-related occupations instead of pursuing PhDs. Importantly, of those who obtain doctorates in math-intensive fields, men and women entering the professoriate have equivalent access to tenure-track academic jobs in science, and they persist and are remunerated at comparable rates-with some caveats that we discuss. The transition from graduate programs to assistant professorships shows more pipeline leakage in the fields in which women are already very prevalent (psychology, life science, social science) than in the math-intensive fields in which they are underrepresented but in which the number of females holding assistant professorships is at least commensurate with (if not greater than) that of males. That is, invitations to interview for tenure-track positions in math-intensive fields-as well as actual employment offers-reveal that female PhD applicants fare at least as well as their male counterparts in math-intensive fields. Along these same lines, our analyses reveal that manuscript reviewing and grant funding are gender neutral: Male and female authors and principal investigators are equally likely to have their manuscripts accepted by journal editors and their grants funded, with only very occasional exceptions. There are no compelling sex differences in hours worked or average citations per publication, but there is an overall male advantage in productivity. We attempt to reconcile these results amid the disparate claims made regarding their causes, examining sex differences in citations, hours worked, and interests. We conclude by suggesting that although in the past, gender discrimination was an important cause of women's underrepresentation in scientific academic careers, this claim has continued to be invoked after it has ceased being a valid cause of women's underrepresentation in math-intensive fields. Consequently, current barriers to women's full participation in mathematically intensive academic science fields are rooted in pre-college factors and the subsequent likelihood of majoring in these fields, and future research should focus on these barriers rather than misdirecting attention toward historical barriers that no longer account for women's underrepresentation in academic science. © The Author(s) 2014.