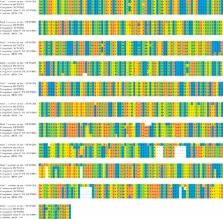 Harbour seals ( Phoca vitulina) and grey seals ( Halichoerus grypus) are final hosts of acanthocephalans in the German North and Baltic Seas. Parasitic infections in seals can cause pathological changes, which may result in deteriorated health of the host. Common gastrointestinal parasites of harbour and grey seals are acanthocephalans and a number of 275 of 2460 (11.2%) investigated seals from 1996 to 2013 were infected with Corynosoma spp. (Acanthocephala, Polymorphidae). The prevalence showed a wave-like pattern: it increased from 1.2% and 0.4% in 1996 and 1997, respectively, to 23.9% during the second phocine distemper epizootic in 2002 and decreased to 6.2% in 2004. In 2005, prevalence peaked again with 25.0% followed by a decrease to 9.3% in 2009 and an increase to 38.5% in 2012. Statistical analysis revealed that harbour seals originating from the North Sea showed a higher prevalence than grey seals, whereas no significant difference between grey and harbour seals from the Baltic Sea was observed. Furthermore, juvenile pinnipedia from the North Sea were significantly less infected with Corynosoma spp. than seals older than seven month. Molecular species identification as well as phylogenetic relationship analysis among the detected Corynosoma species were achieved by sequencing and comparisons of the ribosomal ITS1-5.8S-ITS2-complex and cytochrome-c-oxidase I gene. Molecular analysis resulted in a newly arranged distribution of Acanthocephala in the North Sea as in contrast to previous studies, C. strumosum could not be confirmed as predominant species. Instead, C. magdaleni and a C. magdaleni isolate (isolate Pv1NS) with an atypical number of longitudinal rows of hooks at the proboscis were detected. Furthermore, morphological and molecular analyses indicate the possible finding of a cryptic species (Candidatus Corynosoma nortmeri sp. nov.).

R Poulin (2005)
Global warming can affect the world's biota and the functioning of ecosystems in many indirect ways. Recent evidence indicates that climate change can alter the geographical distribution of parasitic diseases, with potentially drastic consequences for their hosts. It is also possible that warmer conditions could promote the transmission of parasites and raise their local abundance. Here I have compiled experimental data on the effect of temperature on the emergence of infective stages (cercariae) of trematode parasites from their snail intermediate hosts. Temperature-mediated changes in cercarial output varied widely among trematode species, from small reductions to 200-fold increases in response to a 10 degrees C rise in temperature, with a geometric mean suggesting an almost 8-fold increase. Overall, the observed temperature-mediated increases in cercarial output are much more substantial than those expected from basic physiological processes, for which 2- to 3-fold increases are normally seen. Some of the most extreme increases in cercarial output may be artefacts of the methods used in the original studies; however, exclusion of these extreme values has little impact on the preceding conclusion. Across both species values and phylogenetically independent contrasts, neither the magnitude of the initial cercarial output nor the shell size of the snail host correlated with the relative increase in cercarial production mediated by rising temperature. In contrast, the latitude from which the snail-trematode association originated correlated negatively with temperature-mediated increases in cercarial production: within the 20 degrees to 55 degrees latitude range, trematodes from lower latitudes showed more pronounced temperature-driven increases in cercarial output than those from higher latitudes. These results suggest that the small increases in air and water temperature forecast by many climate models will not only influence the geographical distribution of some diseases, but may also promote the proliferation of their infective stages in many ecosystems.

Food webs: a plea for parasites.

R D Cone,  David Marcogliese (1997)
Parasites have the capacity to regulate host populations and may be important determinants of community structure, yet they are usually neglected in studies of food webs. Parasites can provide much of the information on host biology, such as diet and migration, that is necessary to construct accurate webs. Because many parasites have complex life cycles that involve several different hosts, and often depend on trophic interactions for transmission, parasites provide complementary views of web structure and dynamics. Incorporation of parasites in food webs can substantially after baste web properties, Including connectance, chain length and proportions of top and basal species, and can allow the testing of specific hypotheses related to food-web dynamics.