Colovaginal anastomosis: an unusual complication of stapler use in restorative procedure after Hartmann operation 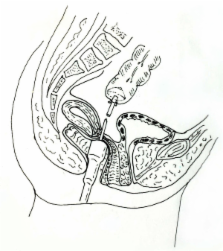 Rectovaginal fistula is uncommon after lower anterior resection for rectal cancer. The most leading cause of this complication is involvement of the posterior wall of the vagina into the staple line when firing the circular stapler.

A 50-year-old women underwent resection for obstructed carcinoma of the sigmoid colon with Hartmann procedure. Four months later she underwent restorative surgery with circular stapler. Following which she developed rectovaginal fistula. A transvaginal repair was performed but stool passing from vagina not per rectum. Laporotomy revealed colovaginal anastomosis, which was corrected accordingly. Patient had an uneventful recovery.

Inadvertent formation of colovaginal anastomosis associated with a rectovaginal fistula is a rare complication caused by the operator's error. The present case again highlights the importance of ensuring that the posterior wall of vagina is away from the staple line.

P. H. Sugarbaker (1996)
Low anastomosis using a circular stapling instrument has become standard for performing a colorectal reconstruction following resection of a rectal cancer. Often these anastomoses are performed deep in the pelvis using a circular stapling instrument without clear visualization of the anastomotic site. In the female patient, unless an adequate stump of rectum is left above the circular staple line, there is danger that the side wall of the posterior aspect of the vagina can be included in the tissue rings (donuts) that are resected by the circular stapling instrument. This leaves the patient at high risk for late development of a rectovaginal fistula by vaginal mucosa being incorporated into the rectal wall. Maintenance of an adequate mucosa beyond the linear staple linen and a vaginal examination prior to firing the circular stapler will prevent this problem. A patient is presented and the technical details for a safe low-low colorectal anastomosis are reviewed.

Sigmoid volvulus in the high altitude of the Andes. Review of 230 cases.

Hugo Gutiérrez-Hermosillo,  B Balderrama,  H Asbun … (1992)
Sigmoid volvulus (SV) is uncommon in the United States. Little has been published in the English literature about the high incidence of SV among rural areas of the Bolivian and Peruvian Andes at 13,000 feet above sea level. A review of 230 cases of SV in a Bolivian hospital is presented. SV accounted for 79 percent of all intestinal obstructions. Nonoperative reduction was attempted in all patients except those with peritonitis. Nonoperative reduction alone was performed in 31 percent of the patients, and 69 percent underwent surgical intervention, 66 percent as an emergency and 3 percent electively. Surgical treatment consisted of sigmoidectomy and primary anastomosis (50 percent), Hartmann's procedure (12 percent), and operative detorsion with sigmoid plication (38 percent). Overall mortality was 13.5 percent. Fifty-seven of the surgically treated patients developed significant complications. The etiology of SV is unclear. High altitude, along with other etiologic factors, may play an important role in SV. To our knowledge, this series represents the highest incidence of SV in bowel obstruction.

K Antonsen,  O Kronborg (1987)
Complications following 178 low anterior resections for rectal carcinoma with the EEA autosuture device are reported prospectively. The operative mortality was 2.8 percent. Clinical anastomotic leakage developed in 27 patients, but in none of the 30 patients over 76 years of age. Two of the five hospital deaths were related to leakage. Long-term steroid treatment and previous pelvic radiotherapy were associated with increased risk of leakage. Severe stenosis following anastomotic leakage was seen in one patient. Intraoperative diverting colostomy was done in 16 patients, but no benefit could be demonstrated. It was concluded that use of the upper sigmoid colon for anastomosis probably is not associated with a higher mortality and morbidity than that after more extensive resections reported in the literature. Future randomized trials should exclude very old patients, in whom no leak was seen, when the upper sigmoid colon was used for stapling after low anterior resection.