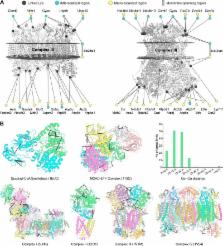 Mitochondria exert an immense amount of cytophysiological functions, but the structural basis of most of these processes is still poorly understood. Here we use cross-linking mass spectrometry to probe the organization of proteins in native mouse heart mitochondria. Our approach provides the largest survey of mitochondrial protein interactions reported so far. In total, we identify 3,322 unique residue-to-residue contacts involving half of the mitochondrial proteome detected by bottom-up proteomics. The obtained mitochondrial protein interactome gives insights in the architecture and submitochondrial localization of defined protein assemblies, and reveals the mitochondrial localization of four proteins not yet included in the MitoCarta database. As one of the highlights, we show that the oxidative phosphorylation complexes I-V exist in close spatial proximity, providing direct evidence for supercomplex assembly in intact mitochondria. The specificity of these contacts is demonstrated by comparative analysis of mitochondria after high salt treatment, which disrupts the native supercomplexes and substantially changes the mitochondrial interactome.

Supercomplexes in the respiratory chains of yeast and mammalian mitochondria.

H Schägger,  Julie K. Pfeiffer (2000)
Around 30-40 years after the first isolation of the five complexes of oxidative phosphorylation from mammalian mitochondria, we present data that fundamentally change the paradigm of how the yeast and mammalian system of oxidative phosphorylation is organized. The complexes are not randomly distributed within the inner mitochondrial membrane, but assemble into supramolecular structures. We show that all cytochrome c oxidase (complex IV) of Saccharomyces cerevisiae is bound to cytochrome c reductase (complex III), which exists in three forms: the free dimer, and two supercomplexes comprising an additional one or two complex IV monomers. The distribution between these forms varies with growth conditions. In mammalian mitochondria, almost all complex I is assembled into supercomplexes comprising complexes I and III and up to four copies of complex IV, which guided us to present a model for a network of respiratory chain complexes: a 'respirasome'. A fraction of total bovine ATP synthase (complex V) was isolated in dimeric form, suggesting that a dimeric state is not limited to S.cerevisiae, but also exists in mammalian mitochondria.

Directed evolution of APEX2 for electron microscopy and proteomics

Stephanie Lam,  Jeffrey D. Martell,  Kimberli J. Kamer … (2014)
APEX is an engineered peroxidase that functions both as an electron microscopy tag, and as a promiscuous labeling enzyme for live-cell proteomics. Because the limited sensitivity of APEX precludes applications requiring low APEX expression, we used yeast display evolution to improve its catalytic efficiency. Our evolved APEX2 is far more active in cells, enabling the superior enrichment of endogenous mitochondrial and endoplasmic reticulum membrane proteins and the use of electron microscopy to resolve the sub-mitochondrial localization of calcium uptake regulatory protein MICU1.

** These authors contributed equally to this work.