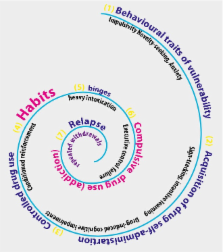 Journal: The European Journal of Neuroscience

This review discusses the evidence for the hypothesis that the development of drug addiction can be understood in terms of interactions between Pavlovian and instrumental learning and memory mechanisms in the brain that underlie the seeking and taking of drugs. It is argued that these behaviours initially are goal-directed, but increasingly become elicited as stimulus–response habits by drug-associated conditioned stimuli that are established by Pavlovian conditioning. It is further argued that compulsive drug use emerges as the result of a loss of prefrontal cortical inhibitory control over drug seeking habits. Data are reviewed that indicate these transitions from use to abuse to addiction depend upon shifts from ventral to dorsal striatal control over behaviour, mediated in part by serial connectivity between the striatum and midbrain dopamine systems. Only some individuals lose control over their drug use, and the importance of behavioural impulsivity as a vulnerability trait predicting stimulant abuse and addiction in animals and humans, together with consideration of an emerging neuroendophenotype for addiction are discussed. Finally, the potential for developing treatments for addiction is considered in light of the neuropsychological advances that are reviewed, including the possibility of targeting drug memory reconsolidation and extinction to reduce Pavlovian influences on drug seeking as a means of promoting abstinence and preventing relapse.

The neural basis of drug craving: an incentive-sensitization theory of addiction.

T E Robinson,  K C Berridge (2015)
This paper presents a biopsychological theory of drug addiction, the 'Incentive-Sensitization Theory'. The theory addresses three fundamental questions. The first is: why do addicts crave drugs? That is, what is the psychological and neurobiological basis of drug craving? The second is: why does drug craving persist even after long periods of abstinence? The third is whether 'wanting' drugs (drug craving) is attributable to 'liking' drugs (to the subjective pleasurable effects of drugs)? The theory posits the following. (1) Addictive drugs share the ability to enhance mesotelencephalic dopamine neurotransmission. (2) One psychological function of this neural system is to attribute 'incentive salience' to the perception and mental representation of events associated with activation of the system. Incentive salience is a psychological process that transforms the perception of stimuli, imbuing them with salience, making them attractive, 'wanted', incentive stimuli. (3) In some individuals the repeated use of addictive drugs produces incremental neuroadaptations in this neural system, rendering it increasingly and perhaps permanently, hypersensitive ('sensitized') to drugs and drug-associated stimuli. The sensitization of dopamine systems is gated by associative learning, which causes excessive incentive salience to be attributed to the act of drug taking and to stimuli associated with drug taking. It is specifically the sensitization of incentive salience, therefore, that transforms ordinary 'wanting' into excessive drug craving. (4) It is further proposed that sensitization of the neural systems responsible for incentive salience ('for wanting') can occur independently of changes in neural systems that mediate the subjective pleasurable effects of drugs (drug 'liking') and of neural systems that mediate withdrawal. Thus, sensitization of incentive salience can produce addictive behavior (compulsive drug seeking and drug taking) even if the expectation of drug pleasure or the aversive properties of withdrawal are diminished and even in the face of strong disincentives, including the loss of reputation, job, home and family. We review evidence for this view of addiction and discuss its implications for understanding the psychology and neurobiology of addiction.

The neural basis of addiction: a pathology of motivation and choice.

Nora D. Volkow,  Peter Kalivas (2005)
A primary behavioral pathology in drug addiction is the overpowering motivational strength and decreased ability to control the desire to obtain drugs. In this review the authors explore how advances in neurobiology are approaching an understanding of the cellular and circuitry underpinnings of addiction, and they describe the novel pharmacotherapeutic targets emerging from this understanding. Findings from neuroimaging of addicts are integrated with cellular studies in animal models of drug seeking. While dopamine is critical for acute reward and initiation of addiction, end-stage addiction results primarily from cellular adaptations in anterior cingulate and orbitofrontal glutamatergic projections to the nucleus accumbens. Pathophysiological plasticity in excitatory transmission reduces the capacity of the prefrontal cortex to initiate behaviors in response to biological rewards and to provide executive control over drug seeking. Simultaneously, the prefrontal cortex is hyperresponsive to stimuli predicting drug availability, resulting in supraphysiological glutamatergic drive in the nucleus accumbens, where excitatory synapses have a reduced capacity to regulate neurotransmission. Cellular adaptations in prefrontal glutamatergic innervation of the accumbens promote the compulsive character of drug seeking in addicts by decreasing the value of natural rewards, diminishing cognitive control (choice), and enhancing glutamatergic drive in response to drug-associated stimuli.

A Imperato,  Gennaro Di Prisco (1988)
The effect of various drugs on the extracellular concentration of dopamine in two terminal dopaminergic areas, the nucleus accumbens septi (a limbic area) and the dorsal caudate nucleus (a subcortical motor area), was studied in freely moving rats by using brain dialysis. Drugs abused by humans (e.g., opiates, ethanol, nicotine, amphetamine, and cocaine) increased extracellular dopamine concentrations in both areas, but especially in the accumbens, and elicited hypermotility at low doses. On the other hand, drugs with aversive properties (e.g., agonists of kappa opioid receptors, U-50,488, tifluadom, and bremazocine) reduced dopamine release in the accumbens and in the caudate and elicited hypomotility. Haloperidol, a neuroleptic drug, increased extracellular dopamine concentrations, but this effect was not preferential for the accumbens and was associated with hypomotility and sedation. Drugs not abused by humans [e.g., imipramine (an antidepressant), atropine (an antimuscarinic drug), and diphenhydramine (an antihistamine)] failed to modify synaptic dopamine concentrations. These results provide biochemical evidence for the hypothesis that stimulation of dopamine transmission in the limbic system might be a fundamental property of drugs that are abused.