Prevalence of Underweight and Its Associated Factors among Reproductive Age Group Women in Ethiopia: Analysis of the 2016 Ethiopian Demographic and Health Survey Data 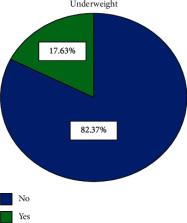 For this study, data were drawn from the 2016 Ethiopian demographic and health survey (EDHS). From the total, 15,683 women participants of the 2016 EDHS; a subsample of 2,848 participants aged 15–49 years who had a complete response to all variables of interest were selected and utilized for analysis. Data were analyzed using SPSS version 20 software program. Pearson's chi-squared test was used to assess the frequency distribution of underweight and is presented with different sociodemographic characteristics. Logistic regression models were applied for analysis. A two-sided p value of less than 0.05 was used to declare a statistically significant association between the independent variables and underweight among women.

Underweight among reproductive age group women in Ethiopia is still a major public health problem, particularly among rural dwellers. Underweight was significantly associated with different sociodemographic variables. Hence, context-based awareness creation programs need to be designed on the prevention methods of underweight in Ethiopia, giving especial emphasis to those residing in rural areas.

Do burdens of underweight and overweight coexist among lower socioeconomic groups in India?

The food, fuel, and financial crises affect the urban and rural poor disproportionately: a review of the evidence.

Aileen C. Cohen,  Marie Ruel,  L Garrett … (2009)
The vulnerability of the urban poor to the recent food and fuel price crisis has been widely acknowledged. The unfolding global financial crisis, which brings higher unemployment and underemployment, is likely to further intensify this vulnerability. This paper reviews the evidence concerning the disproportionate vulnerability of the urban compared with the rural poor to these types of shocks. It reviews some of the unique characteristics of urban life that could make the urban poor particularly susceptible to price and financial shocks and summarizes the evidence regarding the disproportionate vulnerability of the urban poor. The focus is on impacts on poverty, food insecurity, and malnutrition. The review shows that although the urban poor are clearly one of the population groups most affected by the current (and previous) crises, the rural poor, landless, and net buyers are in no better position to confront the crisis without significant suffering. The poorest of the poor are the ones who will be most affected, irrespective of the continent, country, or urban or rural area where they live. The magnitude and severity of their suffering depends on their ability to adapt and on the specific nature, extent, and duration of the coping strategies they adopt. A better understanding of how these coping strategies are used and staggered is critical to help design triggers for action that can prevent households from moving to more desperate measures. Using these early coping strategies as early warning indicators could help prevent dramatic losses in welfare.