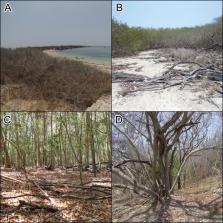 We describe a new species of leaf-toed gecko of the genus Phyllodactylus from María Cleofas Island, the smallest island of Tres Marías Archipelago, Nayarit, México. Genomic, phylogenomic, and morphological evidence support that the new species presents a unique combination of diagnostic characters. Morphologically, the new species has a high number of tubercles, head to tail (mean 47), longitudinal ventral scales (mean 61), and third labial–snout scales (mean 26). Gene flow tests revealed the genetic isolation of insular populations from mainland counterparts. In addition, we confirmed the non-monophyly of P. homolepidurus and P. nolascoensis , and we show that the taxon P. t. saxatilis is a complex; therefore, we propose taxonomic changes within the saxatilis clade. The discovery of this new insular endemic species highlights the urgency of continued exploration of the biological diversity of island faunas of Mexico.

adegenet 1.3-1: new tools for the analysis of genome-wide SNP data.

Ismaïl Ahmed,  Thibaut Jombart (2011)
While the R software is becoming a standard for the analysis of genetic data, classical population genetics tools are being challenged by the increasing availability of genomic sequences. Dedicated tools are needed for harnessing the large amount of information generated by next-generation sequencing technologies. We introduce new tools implemented in the adegenet 1.3-1 package for handling and analyzing genome-wide single nucleotide polymorphism (SNP) data. Using a bit-level coding scheme for SNP data and parallelized computation, adegenet enables the analysis of large genome-wide SNPs datasets using standard personal computers. adegenet 1.3-1 is available from CRAN: http://cran.r-project.org/web/packages/adegenet/. Information and support including a dedicated forum of discussion can be found on the adegenet website: http://adegenet.r-forge.r-project.org/. adegenet is released with a manual and four tutorials totalling over 300 pages of documentation, and distributed under the GNU General Public Licence (≥2). t.jombart@imperial.ac.uk. Supplementary data are available at Bioinformatics online.

Lizards as pollinators and seed dispersers: an island phenomenon