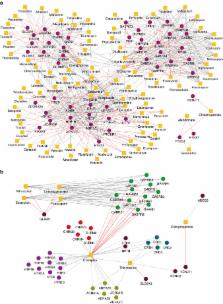 The emergence of large-scale genomic, chemical and pharmacological data provides new opportunities for drug discovery and repositioning. In this work, we develop a computational pipeline, called DTINet, to predict novel drug–target interactions from a constructed heterogeneous network, which integrates diverse drug-related information. DTINet focuses on learning a low-dimensional vector representation of features, which accurately explains the topological properties of individual nodes in the heterogeneous network, and then makes prediction based on these representations via a vector space projection scheme. DTINet achieves substantial performance improvement over other state-of-the-art methods for drug–target interaction prediction. Moreover, we experimentally validate the novel interactions between three drugs and the cyclooxygenase proteins predicted by DTINet, and demonstrate the new potential applications of these identified cyclooxygenase inhibitors in preventing inflammatory diseases. These results indicate that DTINet can provide a practically useful tool for integrating heterogeneous information to predict new drug–target interactions and repurpose existing drugs.

Network-based data integration for drug–target prediction is a promising avenue for drug repositioning, but performance is wanting. Here, the authors introduce DTINet, whose performance is enhanced in the face of noisy, incomplete and high-dimensional biological data by learning low-dimensional vector representations.

Tracking cancer drugs in living cells by thermal profiling of the proteome.

Bernhard Kuster,  Craig T. Werner,  Marcus Bantscheff … (2014)
The thermal stability of proteins can be used to assess ligand binding in living cells. We have generalized this concept by determining the thermal profiles of more than 7000 proteins in human cells by means of mass spectrometry. Monitoring the effects of small-molecule ligands on the profiles delineated more than 50 targets for the kinase inhibitor staurosporine. We identified the heme biosynthesis enzyme ferrochelatase as a target of kinase inhibitors and suggest that its inhibition causes the phototoxicity observed with vemurafenib and alectinib. Thermal shifts were also observed for downstream effectors of drug treatment. In live cells, dasatinib induced shifts in BCR-ABL pathway proteins, including CRK/CRKL. Thermal proteome profiling provides an unbiased measure of drug-target engagement and facilitates identification of markers for drug efficacy and toxicity. Copyright © 2014, American Association for the Advancement of Science.