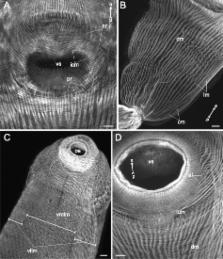 The somatic musculature in trematode hermaphroditic generation (cercariae, metacercariae and adult) is presumed to comprise uniform layers of circular, longitudinal and diagonal muscle fibers of the body wall, and internal dorsoventral muscle fibers. Meanwhile, specific data are few, and there has been no analysis taking the trunk axial differentiation and regionalization into account. Yet presence of the ventral sucker (= acetabulum) morphologically divides the digenean trunk into two regions: preacetabular and postacetabular. The functional differentiation of these two regions is already evident in the nervous system organization, and the goal of our research was to investigate the somatic musculature from the same point of view.

Somatic musculature of ten trematode species was studied with use of fluorescent-labelled phalloidin and confocal microscopy. The body wall of examined species included three main muscle layers (of circular, longitudinal and diagonal fibers), and most of the species had them distinctly better developed in the preacetabuler region. In majority of the species several (up to seven) additional groups of muscle fibers were found within the body wall. Among them the anterioradial, posterioradial, anteriolateral muscle fibers, and U-shaped muscle sets were most abundant. These groups were located on the ventral surface, and associated with the ventral sucker. The additional internal musculature was quite diverse as well, and included up to twelve separate groups of muscle fibers or bundles in one species. The most dense additional bundles were found in the preacetabular region and were connected with the suckers.

Previously unknown additional somatic musculature probably provides the diverse movements of the preacetabular region, ventral sucker, and oral sucker (or anterior organ). Several additional muscle groups of the body wall (anterioradial, posterioradial, anteriolateral fibers and U-shaped sets) are proposed to be included into the musculature ground pattern of trematode hermaphroditic generation. This pattern is thought to be determined by the primary trunk morphofunctional differentiation into the preacetabular and the postacetabular regions.

The Evolution of Organ Systems

Evolution of body-wall musculature in the Platyhelminthes (Acoelomorpha, Catenulida, Rhabditophora).

M Hooge (2001)
In an effort to understand the phylogeny of the Platyhelminthes, the patterns of body-wall musculature of flatworms were studied using fluorescence microscopy and Alexa-488-labeled phalloidin. Species of the Catenulida have a simple orthogonal gridwork of longitudinal and circular muscles. Members of the Rhabditophora have the same gridwork of musculature, but also have diagonal muscles over their entire body. Although a few species of Acoelomorpha possessed a simple orthogonal grid of musculature, most species typically have distinctly different patterns of dorsal and ventral body-wall musculature that include sets of longitudinal, circular, U-shaped, and several kinds of diagonal muscles. Several distinct patterns of musculature were identified, including 8 patterns in 11 families of acoels. These patterns have proven to be useful in clarifying the phylogeny of the Acoelomorpha, particularly with regard to the higher acoels. Patterns of musculature as well as other morphological characters are used here for revisions of acoel systematics, including the return of Eumecynostomum sanguineum (Mecynostomidae) to the genus Aphanostoma (Convolutidae), the revision of the family Childiidae, and the formation of a new family, Actinoposthiidae. Copyright 2001 Wiley-Liss, Inc.