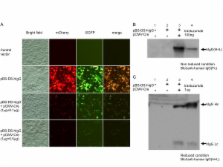 A promoter capable of driving high-level transgene expression in oviduct cells is important for developing transgenic chickens capable of producing therapeutic proteins, including monoclonal antibodies (mAbs), in the whites of laid eggs. Ovalbumin promoters can be used as oviduct-specific regulatory sequences in transgenic chickens, but their promoter activities are not high, according to previous reports.

The Cre/ loxP-based system could significantly increase ovalbumin promoter-driven production of proteins of interest, specifically in oviduct cells. This expression system could be useful for producing therapeutic mAbs at high level using transgenic chickens as bioreactors.

Monoclonal antibody successes in the clinic.

Louis Reichert,  Robert Faden,  Matthew C Dewitz … (2005)
Most monoclonal antibodies in clinical trials are owned by small biotech companies. But with blockbuster-sized revenues and approval rates higher than those for small-molecule drugs, that all may be set to change.

Robert Etches,  R. Bradshaw,  Jennifer Swanberg … (2006)
Primordial germ cells (PGCs) are the precursors of sperm and eggs. In most animals, segregation of the germ line from the somatic lineages is one of the earliest events in development; in avian embryos, PGCs are first identified in an extra-embryonic region, the germinal crescent, after approximately 18 h of incubation. After 50-55 h of development, PGCs migrate to the gonad and subsequently produce functional sperm and oocytes. So far, cultures of PGCs that remain restricted to the germ line have not been reported in any species. Here we show that chicken PGCs can be isolated, cultured and genetically modified while maintaining their commitment to the germ line. Furthermore, we show that chicken PGCs can be induced in vitro to differentiate into embryonic germ cells that contribute to somatic tissues. Retention of the commitment of PGCs to the germ line after extended periods in culture and after genetic modification combined with their capacity to acquire somatic competence in vitro provides a new model for developmental biology. The utility of the model is enhanced by the accessibility of the avian embryo, which facilitates access to the earliest stages of development and supplies a facile route for the reintroduction of PGCs into the embryonic vasculature. In addition, these attributes create new opportunities to manipulate the genome of chickens for agricultural and pharmaceutical applications.

Louis-Marie Houdebine (2008)
Proteins started being used as pharmaceuticals in the 1920s with insulin extracted from pig pancreas. In the early 1980s, human insulin was prepared in recombinant bacteria and it is now used by all patients suffering from diabetes. Several other proteins and particularly human growth hormone are also prepared from bacteria. This success was limited by the fact that bacteria cannot synthesize complex proteins such as monoclonal antibodies or coagulation blood factors which must be matured by post-translational modifications to be active or stable in vivo. These modifications include mainly folding, cleavage, subunit association, γ-carboxylation and glycosylation. They can be fully achieved only in mammalian cells which can be cultured in fermentors at an industrial scale or used in living animals. Several transgenic animal species can produce recombinant proteins but presently two systems started being implemented. The first is milk from farm transgenic mammals which has been studied for 20 years and which allowed a protein, human antithrombin III, to receive the agreement from EMEA (European Agency for the Evaluation of Medicinal Products) to be put on the market in 2006. The second system is chicken egg white which recently became more attractive after essential improvement of the methods used to generate transgenic birds. Two monoclonal antibodies and human interferon-β1a could be recovered from chicken egg white. A broad variety of recombinant proteins were produced experimentally by these systems and a few others. This includes monoclonal antibodies, vaccines, blood factors, hormones, growth factors, cytokines, enzymes, milk proteins, collagen, fibrinogen and others. Although these tools have not yet been optimized and are still being improved, a new era in the production of recombinant pharmaceutical proteins was initiated in 1987 and became a reality in 2006. In the present review, the efficiency of the different animal systems to produce pharmaceutical proteins are described and compared to others including plants and micro-organisms.