Perinatal Survival of a Fetus with Intestinal Volvulus and Intussusception: A Case Report and Review of the Literature 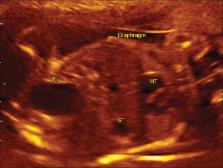 Fetal intestinal volvulus is a rare life-threatening condition. Late diagnosis of volvulus contributes to high rate of morbidity and mortality. It has variable degrees of presentation and survival. Intrauterine volvulus may be complicated by intestinal atresia due to ischemic necrosis. To our knowledge, there are three reported cases of term fetal demise. We report a case of fetal intestinal volvulus with perinatal survival of the largest term infant described with this complication to date. The volvulus was associated with type 3A jejunal atresia and intestinal pathology was noted on prenatal ultrasound. The infant was born via urgent cesarean delivery at 37 6/7 weeks of gestation and underwent emergent exploratory laparotomy with resection of small bowel and primary end-to-end anastomosis. Intrauterine intestinal volvulus may be suspected on prenatal ultrasound but only definitively diagnosed postnatally. Signs of fetal distress and volvulus are rarely associated with reports of survival in the term fetus. We review reported cases of prenatally suspected volvulus in infants documented to survive past the neonatal period. As fetal volvulus and most intestinal atresias/stenoses manifest during the third trimester, we recommend that the limited fetal anatomical survey during growth ultrasounds at 32 to 36 weeks routinely include an assessment of the fetal bowel.

E Kontopoulos,  T Steffensen,  A DeStefano … (2007)
Intestinal malrotation has an incidence of 1 per 6000 live births. The most serious consequence of malrotation is volvulus. Midgut volvulus is a rare condition in which the small bowel and proximal colon twist around the superior mesenteric artery, leading to a high-grade proximal bowel obstruction and vascular compromise of the intestine, thereby leading to infarction of the involved intestine. Midgut volvulus rarely occurs antenatally and is usually not lethal in utero. There are only 7 cases of intrauterine fetal demise caused by midgut volvulus reported in the literature. We report a case of intrauterine fetal demise at 38 weeks of gestation, due to cardiovascular failure and shock from midgut volvulus. Non-specific abnormalities, including ascites and dilated bowel, had been seen on the antenatal ultrasound from the 15th week of gestation. In addition to the volvulus, the fetus had intestinal atresia and arthrogryposis.

Midgut volvulus with hemorrhagic ascites: a rare cause of fetal anemia.

S Noreldeen,  S G Hodgett,  N Venkat-Raman (2008)
Fetal intestinal volvulus is a rare life-threatening condition usually manifesting after birth. It appears on prenatal ultrasound imaging as a twisting of the bowel loops around the mesenteric artery, leading to mechanical obstruction and ischemic necrosis of the bowel. Vascular compromise can result in bowel infarction and eventual perforation of the necrotic bowel, with the development of hemorrhagic fetal ascites and fetal anemia. We report a case of intrauterine midgut volvulus, suspected when ultrasound imaging revealed dilated bowel loops at 31 weeks' gestation, with fetal anemia also suspected on measurement of increased middle cerebral artery peak systolic velocity by Doppler ultrasound examination. Volvulus should be considered in the differential diagnosis when ultrasound imaging demonstrates dilated loops of bowel, especially in association with fetal ascites.

K Kenigsberg,  Omar S Usmani (1991)
This report describes two cases of intrauterine volvulus without associated intestinal malrotation. Polyhydramnios was present in one neonate; the presentation was very sudden and catastrophic in the other. Neither plain films nor contrast enema indicated the correct preoperative diagnosis in these infants. A "normal" plain film or enema in a suspected case of volvulus may lead to a delay in surgical management resulting in extensive ischemic necrosis of the bowel, often with extremely high mortality. Bile emesis or aspirate in neonates demands a high index of suspicion of intestinal obstruction. Shock, bloody diarrhea, and tense and distended abdomen are ominous, indicating volvulus often with gangrene.