Decoding the Brain: Neural Representation and the Limits of Multivariate Pattern Analysis in Cognitive Neuroscience 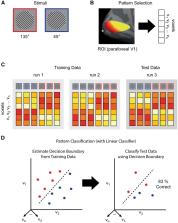 Since its introduction, multivariate pattern analysis (MVPA), or ‘neural decoding’, has transformed the field of cognitive neuroscience. Underlying its influence is a crucial inference, which we call the decoder’s dictum: if information can be decoded from patterns of neural activity, then this provides strong evidence about what information those patterns represent. Although the dictum is a widely held and well-motivated principle in decoding research, it has received scant philosophical attention. We critically evaluate the dictum, arguing that it is false: decodability is a poor guide for revealing the content of neural representations. However, we also suggest how the dictum can be improved on, in order to better justify inferences about neural representation using MVPA.

Distributed and overlapping representations of faces and objects in ventral temporal cortex.

J Haxby, M. I. Gobbini, M. Furey … (2001)
The functional architecture of the object vision pathway in the human brain was investigated using functional magnetic resonance imaging to measure patterns of response in ventral temporal cortex while subjects viewed faces, cats, five categories of man-made objects, and nonsense pictures. A distinct pattern of response was found for each stimulus category. The distinctiveness of the response to a given category was not due simply to the regions that responded maximally to that category, because the category being viewed also could be identified on the basis of the pattern of response when those regions were excluded from the analysis. Patterns of response that discriminated among all categories were found even within cortical regions that responded maximally to only one category. These results indicate that the representations of faces and objects in ventral temporal cortex are widely distributed and overlapping.

Nikolaus Kriegeskorte, Marieke Mur, Douglas A Ruff … (2009)
Inferior temporal (IT) object representations have been intensively studied in monkeys and humans, but representations of the same particular objects have never been compared between the species. Moreover, IT's role in categorization is not well understood. Here, we presented monkeys and humans with the same images of real-world objects and measured the IT response pattern elicited by each image. In order to relate the representations between the species and to computational models, we compare response-pattern dissimilarity matrices. IT response patterns form category clusters, which match between man and monkey. The clusters correspond to animate and inanimate objects; within the animate objects, faces and bodies form subclusters. Within each category, IT distinguishes individual exemplars, and the within-category exemplar similarities also match between the species. Our findings suggest that primate IT across species may host a common code, which combines a categorical and a continuous representation of objects.

Stephenie A. Harrison, Frank Tong (2009)
Visual working memory provides an essential link between perception and higher cognitive functions, allowing for the active maintenance of information regarding stimuli no longer in view1,2. Research suggests that sustained activity in higher-order prefrontal, parietal, inferotemporal and lateral occipital areas supports visual maintenance3-11, and may account for working memory’s limited capacity to hold up to 3-4 items9-11. Because higher-order areas lack the visual selectivity of early sensory areas, it has remained unclear how observers can remember specific visual features, such as the precise orientation of a grating, with minimal decay in performance over delays of many seconds12. One proposal is that sensory areas serve to maintain fine-tuned feature information13, but early visual areas show little to no sustained activity over prolonged delays14-16. Using fMRI decoding methods17, here we show that orientations held in working memory can be decoded from activity patterns in the human visual cortex, even when overall levels of activity are low. Activity patterns in areas V1-V4 could predict which of two oriented gratings was held in memory with mean accuracy levels upwards of 80%, even in participants exhibiting activity that fell to baseline levels after a prolonged delay. These orientation-selective activity patterns were sustained throughout the delay period, evident in individual visual areas, and similar to the responses evoked by unattended, task-irrelevant gratings. Our results demonstrate that early visual areas can retain specific information about visual features held in working memory, over periods of many seconds when no physical stimulus is present.