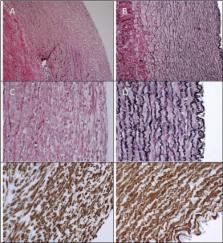 Journal: Annals of Medicine and Surgery

A large animal model with a continuous expanding infrarenal aortic aneurysm gives access to a more realistic AAA model with anatomy and physiology similar to humans, and thus allows for new experimental research in the natural history and treatment options of the disease.

10 pigs (group A) underwent infrarenal aortic dissection, balloon dilatation, infusion of elastase into the lumen and placement of a stenosing cuff around the aorta. 10 control pigs (group B) underwent a sham procedure. The subsequent 28 days the AP-diameters of the aneurysms were measured using ultrasound, hereafter the pigs were euthanized for inspection and AAA wall sampling for histological analysis.

In group A, all pigs developed continuous expanding AAA's with a mean increase in AP-diameter to 16.26 ± 0.93 mm equivalent to a 57% increase. In group B the AP-diameters increased to 11.33 ± 0.13 mm equivalent to 9.3% which was significantly less than in group A ( p < 0.001). In group A, a significant negative association between the preoperative weight and the resulting AP-diameters was found. Histology shoved more or less complete resolution of the elastic tissue in the tunica media in group A. The most frequent complication was a neurological deficit in the lower limbs.

In pigs it's possible to induce continuous expanding AAA's based upon proteolytic degradation and pathological flow, resembling the real life dynamics of human aneurysms. Because the lumbars are preserved, it's also a potential model for further studies of novel endovascular devices and their complications.

Lisa Cassis,  Alan Daugherty,  W Manning (2000)
Increased plasma concentrations of angiotension II (Ang II) have been implicated in atherogenesis. To examine this relationship directly, we infused Ang II or vehicle for 1 month via osmotic minipumps into mature apoE(-/-) mice. These doses of Ang II did not alter arterial blood pressure, body weight, serum cholesterol concentrations, or distribution of lipoprotein cholesterol. However, Ang II infusions promoted an increased severity of aortic atherosclerotic lesions. These Ang II-induced lesions were predominantly lipid-laden macrophages and lymphocytes; moreover, Ang II promoted a marked increase in the number of macrophages present in the adventitial tissue underlying lesions. Unexpectedly, pronounced abdominal aortic aneurysms were present in apoE(-/-) mice infused with Ang II. Sequential sectioning of aneurysmal abdominal aorta revealed two major characteristics: an intact artery that is surrounded by a large remodeled adventitia, and a medial break with pronounced dilation and more modestly remodeled adventitial tissue. Although no atherosclerotic lesions were visible at the medial break point, the presence of hyperlipidemia was required because infusions of Ang II into apoE(+/+) mice failed to generate aneurysms. These results demonstrate that increased plasma concentrations of Ang II have profound and rapid effects on vascular pathology when combined with hyperlipidemia, in the absence of hemodynamic influences.

J Salzmann,  S Anidjar,  D Gentric … (1990)
An experimental in vivo model of aortic aneurysm was established by perfusing an isolated segment of rat abdominal aorta with pancreatic elastase. Ten rats were used in each protocol. Saline-perfused aortas developed no aneurysmal dilations. Elastase-perfused aortas contained aneurysms in the perfused area and a total loss of elastic tissue. Control aortas contained no elastic tissue lesions. There was a quantitative relation between the amount of elastase perfused and aneurysm formation: 1-2 units induced neither macroscopic nor microscopic lesions; 3-6 units induced microscopic elastic tissue damage without macroscopic aneurysm; and more than 6 units produced aneurysmal dilation in all cases. In situ elastase secretion by macrophages was induced by perfusing rat aortas with thioglycollate-activated macrophages or with thioglycollate alone. There was aortitis without true aneurysm and a total loss of elastic tissue in the vicinity of activated macrophages within the aortic media. Perfusion of infra-aneurysmal amount of elastase (1 or 2 units) or thioglycollate plus plasmin (2 units) always induced a large aneurysm, whereas plasmin alone induced neither macroscopic nor microscopic lesions. These morphological results were supported by the significantly elevated elastolytic activity within the aortic wall of animals perfused with thioglycollate plus plasmin 9 days, after perfusion (207.6 +/- 54.8 micrograms elastin-rhodamine lysed/18 hr; control rats, 25.43 +/- 11.13). The results suggest that the presence of elastase within the aortic media leads to aneurysm formation. Activated macrophages within the aortic media may be responsible for elastase secretion and elastic tissue destruction. Plasmin may enhance elastase activity and aggravate the aneurysmal lesion.

Pathophysiology of abdominal aortic aneurysms: insights from the elastase-induced model in mice with different genetic backgrounds.

Christine Pham,  John Curci,  B. Pagano … (2006)
Abdominal aortic aneurysms (AAAs) represent a complex degenerative disorder involving chronic aortic wall inflammation and destructive remodeling of structural connective tissue. Studies using human AAA tissues have helped identify a variety of molecular mediators and matrix-degrading proteinases, which contribute to aneurysm disease, thereby providing a sound foundation for understanding AAAs; however, these human tissue specimens represent only the "end stage" of a long and progressive disease process. Further progress in understanding the pathophysiology of AAAs is therefore dependent in part on the development and application of effective animal models that recapitulate key aspects of the disease. Based on original studies in rats, transient perfusion of the abdominal aorta with porcine pancreatic elastase has provided a reproducible and robust model of AAAs. More recent applications of this model to mice have also opened new avenues for investigation. In this review, we summarize investigations using the elastase-induced mouse model of AAAs including results in animals with targeted deletion of specific genes and more general differences in mice on different genetic backgrounds. These studies have helped us identify genes that are essential to the development of AAAs (such as MMP9, IL6, and AT1R) and to reveal other genes that may be dispensable in aneurysm formation. Investigations on mice from different genetic backgrounds are also beginning to offer a novel approach to evaluate the genetic basis for susceptibility to aneurysm development.