ED 50 of intrathecal ropivacaine for cesarean delivery with and without epidural volume extension with normal saline: a randomized controlled study 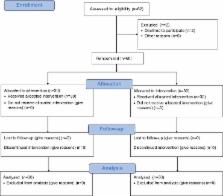 The ED 50 of intrathecal hyperbaric ropivacaine for cesarean section is 8.29 mg, and it is reduced when followed by epidural normal saline bolus ( www.chictr.org.cn, registration number: ChiCTR-ROC-17013382).

Marcus Dixon (1990)
Experiments are conducted to estimate the threshold for an all-or-none response. Threshold is defined to be a point above which 50% of the subjects will respond and below which 50% of the subjects will not respond. Examples are death, death in a fixed time period, shock, fibrillation, emesis. Staircase designs, in particular up-and-down trials, produce median (ED50) estimates of given standard error with as few as one-fifth the number of subjects as the traditional designs with preset numbers of tests at each of several levels of stimulus. We discuss these estimates and their efficiency as well as procedures to estimate standard deviation and its use in designing up-and-down trails. The advantages in using several short series in factorial experiments are presented. Suggestions are given for minimizing the complications of sequential designs. Case studies indicate the efficiency of the design for various applications.

ED50 and ED95 of intrathecal hyperbaric bupivacaine coadministered with opioids for cesarean delivery.

Paula Cohen,  Edward Mirikatani,  Yehuda Ginosar … (2004)
Successful cesarean delivery anesthesia has been reported with use of small doses (5-9 mg) of intrathecal bupivacaine coadministered with opioids. This double-blind, randomized, dose-ranging study determined the ED50 and ED95 of intrathecal bupivacaine (with adjuvant opioids) for cesarean delivery anesthesia. Forty-two parturients undergoing elective cesarean delivery with use of combined spinal-epidural anesthesia received intrathecal hyperbaric bupivacaine in doses of 6, 7, 8, 9, 10, 11, or 12 mg in equal volumes with an added 10 microg intrathecal fentanyl and 200 microg intrathecal morphine. Sensory levels (pinprick) were evaluated every 2 min until a T6 level was achieved. The dose was a success(induction) if a bilateral T6 block occurred in 10 min; otherwise, it was a failure(induction). In addition to being a success(induction), the dose was a success(operation) if no intraoperative epidural supplement was required; otherwise, it was a failure(operation). ED50 and ED95 for both success(induction) and success(operation) were determined with use of a logistic regression model. ED50 for success(induction) and success(operation) were 6.7 and 7.6 mg, respectively, whereas the ED95 for success(induction) and success(operation) were 11.0 and 11.2 mg. Speed of onset correlated inversely with dose. Although no clear advantage for low doses could be demonstrated (hypotension, nausea, vomiting, pruritus, or maternal satisfaction), this study was underpowered to detect significance in these variables. The ED95 of intrathecal bupivacaine under the conditions of this study is considerably in excess of the low doses proposed for cesarean delivery in some recent publications. When doses of intrathecal bupivacaine less than the ED95, particularly near the ED50, are used, the doses should be administered as part of a catheter-based technique.