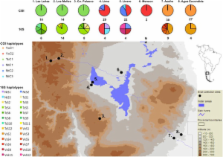 Freshwater lymnaeid snails can act as the intermediate hosts for trematode parasites such as the liver fluke Fasciola hepatica, that cause significant economic and biomedical burden worldwide, particularly through bovine fascioliasis. Transmission potential is tightly coupled to local compatibility with snail hosts, so accurate identification of lymnaeid species is crucial for understanding disease risk, especially when invasive species are encountered. Mendoza Province, in Argentina, is a center of livestock production and also an area of endemic fascioliasis transmission. However, the distribution of lymnaeid species in the region is not well known.

This study highlights the need of a robust taxonomic framework for the identification of lymnaeid snails, incorporating molecular, morphological and ecological variables while avoiding nomenclature redundancy. As the three species observed here, including one alien invasive species, are considered hosts of varying susceptibility to Fasciola parasites, and given the economic importance of fascioliasis for livestock production, this research has critical importance for the ultimate aim of controlling disease transmission.

Bridging gaps in the molecular phylogeny of the Lymnaeidae (Gastropoda: Pulmonata), vectors of Fascioliasis

Ana Correa,  Juan Escobar,  Patrick Durand … (2010)
Background Lymnaeidae snails play a prominent role in the transmission of helminths, mainly trematodes of medical and veterinary importance (e.g., Fasciola liver flukes). As this family exhibits a great diversity in shell morphology but extremely homogeneous anatomical traits, the systematics of Lymnaeidae has long been controversial. Using the most complete dataset to date, we examined phylogenetic relationships among 50 taxa of this family using a supermatrix approach (concatenation of the 16 S, ITS-1 and ITS-2 genes, representing 5054 base pairs) involving both Maximum Likelihood and Bayesian Inference. Results Our phylogenetic analysis demonstrates the existence of three deep clades of Lymnaeidae representing the main geographic origin of species (America, Eurasia and the Indo-Pacific region). This phylogeny allowed us to discuss on potential biological invasions and map important characters, such as, the susceptibility to infection by Fasciola hepatica and F. gigantica, and the haploid number of chromosomes (n). We found that intermediate hosts of F. gigantica cluster within one deep clade, while intermediate hosts of F. hepatica are widely spread across the phylogeny. In addition, chromosome number seems to have evolved from n = 18 to n = 17 and n = 16. Conclusion Our study contributes to deepen our understanding of Lymnaeidae phylogeny by both sampling at worldwide scale and combining information from various genes (supermatrix approach). This phylogeny provides insights into the evolutionary relationships among genera and species and demonstrates that the nomenclature of most genera in the Lymnaeidae does not reflect evolutionary relationships. This study highlights the importance of performing basic studies in systematics to guide epidemiological control programs.

Characterisation of Lymnaea cubensis, L. viatrix and L. neotropica n. sp., the main vectors of Fasciola hepatica in Latin America, by analysis of their ribosomal and mitochondrial DNA.

R Mera,  Patricio Artigas,  J Pointier … (2007)
Although, in the endemic areas throughout the world, human fascioliasis presents varying patterns in its epidemiology, the species of lymnaeid snail that act as intermediate hosts and vectors are always crucial in the transmission of the causative parasites. Species in the Galba/Fossaria group of snails, such as Lymnaea cubensis, L. viatrix var. A ventricosa, L. viatrix var. B elongata and Galba truncatula, appear to be frequently involved in the transmission of Fasciola hepatica in Central and South America, although specific classification within this morphologically and anatomically confusing group is often very difficult. To explore the potential use of molecular analyses in the identification of vector snails, regions of the ribosomal DNA - the small subunit (18S) gene and internal transcribed spacers (ITS-2 and ITS-1) - and of the mitochondrial DNA - the cytochrome c oxidase subunit I (COI) - of wild-caught lymnaeid snails of L. cubensis, L. viatrix var. A ventricosa, L. viatrix var. B elongata and G. truncatula have been sequenced. The samples of the Latin American species included specimens from the respective type localities. The genetic distances observed and the results of phylogenetic analyses demonstrate that two different species exist within L. viatrix. Lymnaea neotropica n. sp. (=L. viatrix var. B elongata) is here proposed for specimens from Lima, Peru, and is differentiated from L. viatrix (=L. viatrix var. A ventricosa), L. cubensis and G. truncatula. The data collected on the 18S ribosomal-RNA gene indicate that the snails investigated may cover more than one supraspecific taxon. The ITS-2, ITS-1 and COI nucleotide sequences are clearly useful markers for the differentiation of these morpho-anatomically similar lymnaeid species. The numerous microsatellite repeats found within ITS-2 are potential tools for differentiation at population level.