Environmental Epigenetics and a Unified Theory of the Molecular Aspects of Evolution: A Neo-Lamarckian Concept that Facilitates Neo-Darwinian Evolution 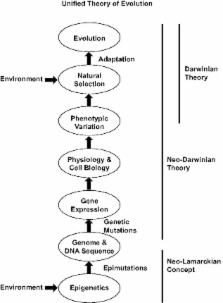 The structure of scientific revolution

The significance of responses of the genome to challenge.

An epigenetic mutation responsible for natural variation in floral symmetry.

Stephanie Coen,  C Vincent-Delorme,  P Cubas (1999)
Although there have been many molecular studies of morphological mutants generated in the laboratory, it is unclear how these are related to mutants in natural populations, where the constraints of natural selection and breeding structure are quite different. Here we characterize a naturally occurring mutant of Linaria vulgaris, originally described more than 250 years ago by Linnaeus, in which the fundamental symmetry of the flower is changed from bilateral to radial. We show that the mutant carries a defect in Lcyc, a homologue of the cycloidea gene which controls dorsoventral asymmetry in Antirrhinum. The Lcyc gene is extensively methylated and transcriptionally silent in the mutant. This modification is heritable and co-segregates with the mutant phenotype. Occasionally the mutant reverts phenotypically during somatic development, correlating with demethylation of Lcyc and restoration of gene expression. It is surprising that the first natural morphological mutant to be characterized should trace to methylation, given the rarity of this mutational mechanism in the laboratory. This indicates that epigenetic mutations may play a more significant role in evolution than has hitherto been suspected.