Contraceptive Use and the Risk of Ectopic Pregnancy: A Multi-Center Case-Control Study 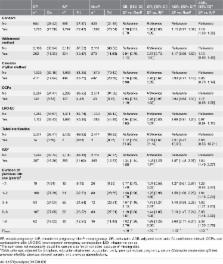 To evaluate the association between the risk of ectopic pregnancy (EP) and the use of common contraceptives during the previous and current conception/menstrual cycle.

A multi-center case-control study was conducted in Shanghai. Women diagnosed with EP were recruited as the case group (n = 2,411). Women with intrauterine pregnancy (IUP) (n = 2,416) and non-pregnant women (n = 2,419) were matched as controls at a ratio of 1∶1. Information regarding the previous and current use of contraceptives was collected. Multivariate logistic regression analyses were performed to calculate odds ratios (ORs) and the corresponding 95% confidential intervals (CIs).

Current use of most contraceptives reduce the risk of both IUP and EP. However, if the contraceptive method fails, the proportions of EP may be higher than those of non-users. In the case of contraceptive failure in the current cycle, EP cases should be differentiated according to current use of OCPs, LNG-EC, IUDs, and tubal sterilization. In addition, attention should be paid to women with previous long-term use of IUDs.

Cynthia M Farquhar (2015)
Ectopic pregnancy is an important cause of morbidity and mortality worldwide. Use of transvaginal ultrasonography and quantitative measurement of the beta subunit of human chorionic gonadotropin (beta-hCG) has led to a reduction in the need for diagnostic laparoscopy. Furthermore, with earlier diagnosis, medical therapy with methotrexate can be offered and surgery avoided in some women, though the best regimen remains unclear. In the surgical management of ectopic pregnancy, the benefits of salpingectomy over salpingostomy are uncertain. Although there have been advances in the management of ectopic pregnancy there are still questions to be answered.

Current knowledge of the aetiology of human tubal ectopic pregnancy.

Estimates of contraceptive failure from the 2002 National Survey of Family Growth.

Akinrinola Bankole,  Melville Vaughan,  Kathryn Kost … (2007)
In 2001, the US government's "Healthy People 2010" initiative set a goal of reducing contraceptive failure during the first year of use from 13% in 1995 to 7% by 2010. We provide updated estimates of contraceptive failure for the most commonly used reversible methods in the United States, as well as an assessment of changes in failure rates from 1995 to 2002. Estimates are obtained using the 2002 National Survey of Family Growth (NSFG), a nationally representative sample of US women containing information on their characteristics, pregnancies and contraceptive use. We also use the 2001 Abortion Patient Survey to correct for underreporting of abortion in the NSFG. We measure trends in contraceptive failure between 1995 and 2002, provide new estimates for several population subgroups, examine changes in subgroup differences since 1995 and identify socioeconomic characteristics associated with elevated risks of failure for three commonly used reversible contraceptive methods in the United States: the pill, male condom and withdrawal. In 2002, 12.4% of all episodes of contraceptive use ended with a failure within 12 months after initiation of use. Injectable and oral contraceptives remain the most effective reversible methods used by women in the United States, with probabilities of failure during the first 12 months of use of 7% and 9%, respectively. The probabilities of failure for withdrawal (18%) and the condom (17%) are similar. Reliance on fertility-awareness-based methods results in the highest probability of failure (25%). Population subgroups experience different probabilities of failure, but the characteristics of users that may predict elevated risks are not the same for all methods. There was no clear improvement in contraceptive effectiveness between 1995 and 2002. Failure rates remain high for users of the condom, withdrawal and fertility-awareness methods, but for all methods, the risk of failure is greatly affected by socioeconomic characteristics of the users.

This work was supported by Shanghai Scientific and Technical Committee Grants (124119a4802). The funder had no role in study design, data collection and analysis, decision to publish, or preparation of the manuscript.

Data Availability The authors confirm that all data underlying the findings are fully available without restriction. All relevant data are within the paper and its Supporting Information files.
Link to data:
ScienceOpen disciplines: Uncategorized