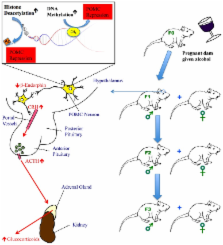 Fetal alcohol spectrum disorders (FASD) are a group of related conditions that arise from prenatal exposure to maternal consumption of the teratogen, ethanol. It has been estimated that roughly 1% of children in the US suffer from FASD ( Sampson etal., 1997), though in some world populations, such as inhabitants of some poorer regions of South Africa, the rate can climb to as high as 20% ( May etal., 2013). FASD are the largest cause of mental retardation in U.S. neonates, and ironically, are entirely preventable. FASD have been linked to major changes in the hypothalamic-pituitary-adrenal (HPA) axis, resulting in lifelong impairments through mental disorders, retardation, and sensitivity to stress. FASD are linked to an impaired immune system which consequently leads to an elevated risk of cancer and other diseases. FASD arise from a complex interplay of genetic and epigenetic factors. Here, we review current literature on the topic to tease apart what is known in these areas particularly emphasizing HPA axis dysfunction and how this ties into new studies of transgenerational inheritance in FASD.

Alika Maunakea,  Raman P. Nagarajan,  Mikhail Bilenky … (2010)
While the methylation of DNA in 5′ promoters suppresses gene expression, the role of DNA methylation in gene bodies is unclear 1–5 . In mammals, tissue- and cell type-specific methylation is present in a small percentage of 5′ CpG island (CGI) promoters, while a far greater proportion occurs across gene bodies, coinciding with highly conserved sequences 5–10 . Tissue-specific intragenic methylation might reduce, 3 or, paradoxically, enhance transcription elongation efficiency 1,2,4,5 . Capped analysis of gene expression (CAGE) experiments also indicate that transcription commonly initiates within and between genes 11–15 . To investigate the role of intragenic methylation, we generated a map of DNA methylation from human brain encompassing 24.7 million of the 28 million CpG sites. From the dense, high-resolution coverage of CpG islands, the majority of methylated CpG islands were revealed to be in intragenic and intergenic regions, while less than 3% of CpG islands in 5′ promoters were methylated. The CpG islands in all three locations overlapped with RNA markers of transcription initiation, and unmethylated CpG islands also overlapped significantly with trimethylation of H3K4, a histone modification enriched at promoters 16 . The general and CpG-island-specific patterns of methylation are conserved in mouse tissues. An in-depth investigation of the human SHANK3 locus 17,18 and its mouse homologue demonstrated that this tissue-specific DNA methylation regulates intragenic promoter activity in vitro and in vivo. These methylation-regulated, alternative transcripts are expressed in a tissue and cell type-specific manner, and are expressed differentially within a single cell type from distinct brain regions. These results support a major role for intragenic methylation in regulating cell context-specific alternative promoters in gene bodies.

The DNA methyltransferases of mammals.

T Bestor (2000)
The biological significance of 5-methylcytosine was in doubt for many years, but is no longer. Through targeted mutagenesis in mice it has been learnt that every protein shown by biochemical tests to be involved in the establishment, maintenance or interpretation of genomic methylation patterns is encoded by an essential gene. A human genetic disorder (ICF syndrome) has recently been shown to be caused by mutations in the DNA methyltransferase 3B (DNMT3B) gene. A second human disorder (Rett syndrome) has been found to result from mutations in the MECP2 gene, which encodes a protein that binds to methylated DNA. Global genome demethylation caused by targeted mutations in the DNA methyltransferase-1 (Dnmt1) gene has shown that cytosine methylation plays essential roles in X-inactivation, genomic imprinting and genome stabilization. The majority of genomic 5-methylcytosine is now known to enforce the transcriptional silence of the enormous burden of transposons and retroviruses that have accumulated in the mammalian genome. It has also become clear that programmed changes in methylation patterns are less important in the regulation of mammalian development than was previously believed. Although a number of outstanding questions have yet to be answered (one of these questions involves the nature of the cues that designate sites for methylation at particular stages of gametogenesis and early development), studies of DNA methyltransferases are likely to provide further insights into the biological functions of genomic methylation patterns.

Evolution of microRNA diversity and regulation in animals.

Eugene Berezikov (2011)
In the past decade, microRNAs (miRNAs) have been uncovered as key regulators of gene expression at the post-transcriptional level. The ancient origin of miRNAs, their dramatic expansion in bilaterian animals and their function in providing robustness to transcriptional programmes suggest that miRNAs are instrumental in the evolution of organismal complexity. Advances in understanding miRNA biology, combined with the increasing availability of diverse sequenced genomes, have begun to reveal the molecular mechanisms that underlie the evolution of miRNAs and their targets. Insights are also emerging into how the evolution of miRNA-containing regulatory networks has contributed to organismal complexity.

This article was submitted to Epigenomics and Epigenetics, a section of the journal Frontiers in Genetics.