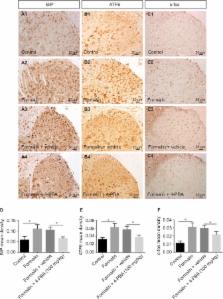 These results suggest that ER stress is involved in formalin-induced inflammatory pain and that inhibition of ER stress may attenuate central sensitization induced by peripheral inflammatory stimulation.

The formalin test: a quantitative study of the analgesic effects of morphine, meperidine, and brain stem stimulation in rats and cats.

Elizabeth S. Dennis,  D Dubuisson (1977)
A method for assessing pain and analgesia in rats and cats is described. The procedure involves subcutaneous injection of dilute formalin into the forepaw, after which the animal's responses are rated according to objective behavioral criteria. The formalin test is a statistically valid technique which has two advantages over other pain tests: (1) little or no restraint is necessary, permitting unhindered observation of the complete range of behavioral responses; and (2) the pain stimulus is continuous rather than transient, thus bearing greater resemblance to most clinical pain. The analgesic effects of morphine, meperidine, and stimulation of the periaqueductal grey matter are evaluated using this test.

Ca(2+)/CaM-dependent kinases: from activation to function.

S Hook,  A Means (2000)
Calmodulin (CaM) is an essential protein that serves as a ubiquitous intracellular receptor for Ca(2+). The Ca(2+)/CaM complex initiates a plethora of signaling cascades that culminate in alteration of cellular functions. Among the many Ca(2+)/CaM-binding proteins to be discovered, the multifunctional protein kinases CaMKI, II, and IV play pivotal roles. Our review focuses on this class of CaM kinases to illustrate the structural and biochemical basis for Ca(2+)/CaM interaction with and regulation of its target enzymes. Gene transcription has been chosen as the functional endpoint to illustrate the recent advances in Ca(2+)/CaM-mediated signal transduction mechanisms.