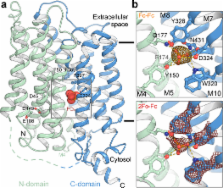 P. Andrew Karplus,  Kay Diederichs (2012)
In macromolecular x-ray crystallography, refinement R values measure the agreement between observed and calculated data. Analogously, R(merge) values reporting on the agreement between multiple measurements of a given reflection are used to assess data quality. Here, we show that despite their widespread use, R(merge) values are poorly suited for determining the high-resolution limit and that current standard protocols discard much useful data. We introduce a statistic that estimates the correlation of an observed data set with the underlying (not measurable) true signal; this quantity, CC*, provides a single statistically valid guide for deciding which data are useful. CC* also can be used to assess model and data quality on the same scale, and this reveals when data quality is limiting model improvement.

Maciej J Zamek-Gliszczynski,  Toshihisa Ishikawa,  Belinda Lee … (2010)
Membrane transporters can be major determinants of the pharmacokinetic, safety and efficacy profiles of drugs. This presents several key questions for drug development, including which transporters are clinically important in drug absorption and disposition, and which in vitro methods are suitable for studying drug interactions with these transporters. In addition, what criteria should trigger follow-up clinical studies, and which clinical studies should be conducted if needed. In this article, we provide the recommendations of the International Transporter Consortium on these issues, and present decision trees that are intended to help guide clinical studies on the currently recognized most important drug transporter interactions. The recommendations are generally intended to support clinical development and filing of a new drug application. Overall, it is advised that the timing of transporter investigations should be driven by efficacy, safety and clinical trial enrolment questions (for example, exclusion and inclusion criteria), as well as a need for further understanding of the absorption, distribution, metabolism and excretion properties of the drug molecule, and information required for drug labelling.

Correspondence and requests for materials should be addressed to R.M.S. ( stroud@ 123456msg.ucsf.edu

Structures for the Glut's are revealing terrific insight into the structure/function relationship. Here is another example of a Major Facilitator Superfamily member stucture - a phosphate transporter. This elegant structure adds to our understanding of these MFS proteins.