PD-L1 is a novel direct target of HIF-1α, and its blockade under hypoxia enhanced MDSC-mediated T cell activation 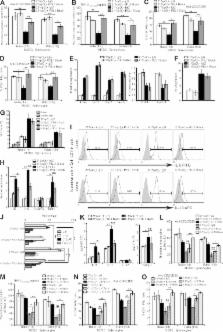 Tumor-infiltrating myeloid cells such as myeloid-derived suppressor cells (MDSCs) and tumor-associated macrophages (TAMs) form an important component of the hypoxic tumor microenvironment. Here, we investigated the influence of hypoxia on immune checkpoint receptors (programmed death [PD]-1 and CTLA-4) and their respective ligands (PD-1 ligand 1 [PD-L1], PD-L2, CD80, and CD86) on MDSCs. We demonstrate that MDSCs at the tumor site show a differential expression of PD-L1 as compared with MDSCs from peripheral lymphoid organ (spleen). Hypoxia caused a rapid, dramatic, and selective up-regulation of PD-L1 on splenic MDSCs in tumor-bearing mice. This was not limited to MDSCs, as hypoxia also significantly increased the expression of PD-L1 on macrophages, dendritic cells, and tumor cells. Furthermore, PD-L1 up-regulation under hypoxia was dependent on hypoxia-inducible factor-1α (HIF-1α) but not HIF-2α. Chromatin immunoprecipitation and luciferase reporter assay revealed direct binding of HIF-1α to a transcriptionally active hypoxia-response element (HRE) in the PD-L1 proximal promoter. Blockade of PD-L1 under hypoxia enhanced MDSC-mediated T cell activation and was accompanied by the down-regulation of MDSCs IL-6 and IL-10. Finally, neutralizing antibodies against IL-10 under hypoxia significantly abrogated the suppressive activity of MDSCs. Simultaneous blockade of PD-L1 along with inhibition of HIF-1α may thus represent a novel approach for cancer immunotherapy.

Tyler Curiel,  Shuang Wei,  Haidong Dong … (2003)
Suppression of dendritic cell function in cancer patients is thought to contribute to the inhibition of immune responses and disease progression. Molecular mechanisms of this suppression remain elusive, however. Here, we show that a fraction of blood monocyte-derived myeloid dendritic cells (MDCs) express B7-H1, a member of the B7 family, on the cell surface. B7-H1 could be further upregulated by tumor environmental factors. Consistent with this finding, virtually all MDCs isolated from the tissues or draining lymph nodes of ovarian carcinomas express B7-H1. Blockade of B7-H1 enhanced MDC-mediated T-cell activation and was accompanied by downregulation of T-cell interleukin (IL)-10 and upregulation of IL-2 and interferon (IFN)-gamma. T cells conditioned with the B7-H1-blocked MDCs had a more potent ability to inhibit autologous human ovarian carcinoma growth in non-obese diabetic-severe combined immunodeficient (NOD-SCID) mice. Therefore, upregulation of B7-H1 on MDCs in the tumor microenvironment downregulates T-cell immunity. Blockade of B7-H1 represents one approach for cancer immunotherapy.

Dmitry I. Gabrilovich,  Srinivas Nagaraj,  Je-In Youn … (2008)
Myeloid-derived suppressor cells (MDSC) are a heterogeneous group of cells that play a critical role in tumor associated immune suppression. In an attempt to identify a specific subset of MDSC primarily responsible for immunosuppressive features of these cells, 10 different tumor models were investigated. All models showed variable but significant increase in the population of MDSC. Variability of MDSC expansion in vivo matched closely the effect of tumor cell condition medium in vitro. MDSC consists of two major subsets of Ly6G(+)Ly6C(low) granulocytic and Ly6G(-)Ly6C(high) monocytic cells. Granulocytic MDSC have increased level of reactive oxygen species and undetectable level of NO whereas monocytic MDSC had increased level of NO but undetectable levels of reactive oxygen species. However, their suppressive activity per cell basis was comparable. Almost all tumor models demonstrated a preferential expansion of granulocytic subset of MDSC. We performed a phenotypical and functional analysis of several surface molecules previously suggested to be involved in MDSC-mediated suppression of T cells: CD115, CD124, CD80, PD-L1, and PD-L2. Although substantial proportion of MDSC expressed those molecules no differences in the level of their expression or the proportion, positive cells were found between MDSC and cells from tumor-free mice that lack immune suppressive activity. The level of MDSC-mediated T cell suppression did not depend on the expression of these molecules. These data indicate that suppressive features of MDSC is caused not by expansion of a specific subset but more likely represent a functional state of these cells.