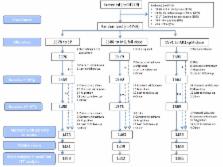 Clara Menéndez and colleagues conducted an open-label randomized controlled trial in HIV-negative pregnant women in Benin, Gabon, Mozambique, and Tanzania to evaluate the safety and efficacy of mefloquine compared to sulfadoxine-pyrimethamine for intermittent preventative therapy for malaria.

Intermittent preventive treatment in pregnancy (IPTp) with sulfadoxine-pyrimethamine (SP) is recommended by WHO to prevent malaria in African pregnant women. The spread of SP parasite resistance has raised concerns regarding long-term use for IPT. Mefloquine (MQ) is the most promising of available alternatives to SP based on safety profile, long half-life, and high efficacy in Africa. We evaluated the safety and efficacy of MQ for IPTp compared to those of SP in HIV-negative women.

Women taking MQ IPTp (15 mg/kg) in the context of long lasting insecticide treated nets had similar prevalence rates of low birth weight as those taking SP IPTp. MQ recipients had less clinical malaria than SP recipients, and the pregnancy outcomes and safety profile were similar. MQ had poorer tolerability even when splitting the dose over two days. These results do not support a change in the current IPTp policy.

Half the world's population is at risk of malaria, a mosquito-borne parasitic disease that kills about 600,000 people every year. Most of these deaths occur among young children in sub-Saharan Africa but pregnant women and their unborn children living in Africa are also very vulnerable to malaria. Infection with malaria during pregnancy can cause severe maternal anemia (reduced red blood cell numbers), stillbirths, and pre-term and low-birthweight babies, and is responsible for the deaths of many African babies and women. To prevent this loss of life, the World Health Organization (WHO) recommends a three-pronged approach—the delivery to pregnant women of the antimalarial drug sulfadoxine-pyrimethamine (SP) at each scheduled antenatal care visit given at least one month apart (intermittent preventive treatment in pregnancy; IPTp), the use of insecticide treated bed nets to protect pregnant women from the bites of infected mosquitoes, and effective case management of pregnant women with malarial illness.

IPTp with SP reduces the delivery of low-birth-weight babies and neonatal deaths but malaria parasites are becoming resistant to SP. Thus, other antimalarial drugs need to be evaluated for use in IPTp. Suitable drugs need to remain in the body for a long time to maximize their prophylactic (preventative) effect, they need to be given as a single dose at antenatal clinic visits to ensure compliance, and they must not harm the unborn child. In this open-label, randomized controlled trial (RCT), the researchers compare the efficacy and safety of IPTp with SP and mefloquine (MQ, an antimalarial drug that matches these criteria) in HIV-negative women living in Africa. The study also compares the tolerability of two MQ regimens. RCTs compare outcomes in groups of people chosen to receive different interventions through the play of chance; in open-label RCTs, both the researchers and the study participants know which treatment is being administered. IPTp with SP is only recommended for HIV-negative women because SP interacts with cotrimoxazole, which is routinely given to HIV-positive individuals to prevent infections.

The researchers assigned 4,749 pregnant women in Benin, Gabon, Mozambique, and Tanzania to one of three study groups. Participants in the SP and MQ groups received two doses of SP or MQ, respectively, administered at least one month apart. Participants in the split-dose MQ group received each MQ dose as half doses given on consecutive days. The prevalence of low-birth-weight deliveries (the study's primary outcome; the prevalence of a condition is the proportion of a population with that condition) was similar in the SP group and in the combined MQ groups. However, compared to women who received SP, women who received MQ had a lower risk of parasitemia (parasites in the blood), a lower risk of anemia at delivery, fewer episodes of clinical malaria, and fewer outpatient attendances. The prevalence of placental infection with malaria parasites and of adverse pregnancy outcomes such as stillbirth was similar in all the study groups. Finally, the tolerability of IPTp was poorer in the two MQ intervention groups than in the SP group, but similar proportions of adverse events (mainly dizziness and vomiting) were reported for the two MQ dosing regimens.

These findings indicate that HIV-negative African women taking MQ for IPTp had a similar risk of a low-birth-weight delivery (the study's primary outcome) and lower risk of malaria illness during pregnancy than women taking SP for IPTp. Because the study did not have a no-IPTp arm (for ethical reasons), these findings provide no information about the efficacy or safety or either MQ or SP per se; these findings only indicate that MQ is no more efficacious than SP in the prevention of low-birth-weight babies. Moreover, because the study was open-label, the accuracy of the findings related to the tolerability and safety of MQ compared to SP may be limited because of biases in the assessment of safety outcomes. Given that the MQ dose used here for IPTp was associated with poorer tolerability than that of SP, these findings do not support the use of MQ instead of SP for IPTp.

Sheng-Jun Wang,  B Eilers,  R Lipp … (1991)
The Ballard Maturational Score was refined and expanded to achieve greater accuracy and to include extremely premature neonates. To test validity, accuracy, interrater reliability, and optimal postnatal age at examination, the resulting New Ballard Score (NBS) was assessed for 578 newly born infants and the results were analyzed. Gestational ages ranged from 20 to 44 weeks and postnatal ages at examination ranged from birth to 96 hours. In 530 infants, gestational age by last menstrual period was confirmed by agreement within 2 weeks with gestational age by prenatal ultrasonography (C-GLMP). For these infants, correlation between gestational age by NBS and C-GLMP was 0.97. Mean differences between gestational age by NBS and C-GLMP were 0.32 +/- 1.58 weeks and 0.15 +/- 1.46 weeks among the extremely premature infants (less than 26 weeks) and among the total population, respectively. Correlations between the individual criteria and C-GLMP ranged from 0.72 to 0.82. Interrater reliability of NBS, as determined by correlation between raters who rated the same subgroup of infants, ws 0.95. For infants less than 26 weeks of gestational age, the greatest validity (97% within 2 weeks of C-GLMP) was seen when the examination was performed before 12 hours of postnatal age. For infants at least 26 weeks of gestational age, percentages of agreement with C-GLMP remained constant, averaging 92% for all postnatal age categories up to 96 hours. The NBS is a valid and accurate gestational assessment tool for extremely premature infants and remains valid for the entire newborn infant population.

The impact of placental malaria on gestational age and birth weight.

Ahlam M. Ismail,  John J. Aponte,  P Ventura … (2000)
Maternal malaria is associated with reduced birth weight, which is thought to be effected through placental insufficiency, which leads to intrauterine growth retardation (IUGR). The impact of malaria on preterm delivery is unclear. The effects of placental malaria-related changes on birth weight and gestational age were studied in 1177 mothers (and their newborns) from Tanzania. Evidence of malaria infection was found in 75.5% of placental samples. Only massive mononuclear intervillous inflammatory infiltration (MMI) was associated with increased risk of low birth weight (odds ratio ¿OR, 4.0). Maternal parasitized red blood cells and perivillous fibrin deposition both were associated independently with increased risk of premature delivery (OR, 3.2; OR, 2.1, respectively). MMI is an important mechanism in the pathogenesis of IUGR in malaria-infected placentas. This study also shows that placental malaria causes prematurity even in high-transmission areas. The impact of maternal malaria on infant mortality may be greater than was thought previously.

Effect of sulfadoxine-pyrimethamine resistance on the efficacy of intermittent preventive therapy for malaria control during pregnancy: a systematic review.

CM is a member of the Editorial Board of PLOS Medicine. The rest of coauthors have declared that no competing interests exist.