Incremental Cost of Conducting Population-Based Prevalence Surveys for a Neglected Tropical Disease: The Example of Trachoma in 8 National Programs 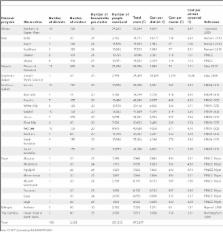 The median cost per district survey was $4,784 (inter-quartile range [IQR] = $3,508–$6,650) while the median cost per cluster was $311 (IQR = $119–$393). Analysis by cost categories (personnel, transportation, supplies and other) and cost activity (training, field work, supervision and data entry) revealed that the main cost drivers were personnel and transportation during field work.

Population-based cluster random surveys are used to provide the evidence base to set objectives and determine when elimination targets have been reached for several neglected tropical diseases, including trachoma. The cost of conducting epidemiologically rigorous prevalence surveys should not be a barrier to program implementation or evaluation.

The costs of conducting population-based prevalence surveys for neglected tropical diseases such as trachoma are often cited as a reason that program managers do not conduct baseline or impact assessments when guidelines suggest they are warranted. The authors conducted a review of actual costs incurred during the implementation of 165 district level surveys in 8 national trachoma control programs to identify the median and mean costs per district and per cluster. In addition, the costs of the principal activities that are the most expensive were measured. The data show that field work is the most expensive activity for a prevalence survey, with personnel ( per diems, allowances and accommodation) and transport costs driving the total cost of the survey. These findings can be used by program managers to budget for population-based prevalence surveys that are recommended for baseline and evaluation surveys, and periodic uptake surveys for neglected tropical diseases such as trachoma.

A simple system for the assessment of trachoma and its complications.

Jeffrey B. Jones,  B Thylefors,  Laura B K R Jones … (1986)
A simple grading system for trachoma, based on the presence or absence of five selected "key" signs, has been developed. The method was tested in the field and showed good observer agreement, the most critical point being the identification of severe cases of the disease. It is expected that the system will facilitate the assessment of trachoma and its complications by non-specialist health personnel working at the community level.

Trachoma: global magnitude of a preventable cause of blindness.

Jason J. Rose,  D Pascolini,  S Mariotti (2009)
Trachoma is the leading cause of infectious blindness worldwide. It is known to be highly correlated with poverty, limited access to healthcare services and water. In 2003, the WHO estimated that 84 million people were suffering from active trachoma, and 7.6 million were severely visually impaired or blind as a result of trachoma: this study provides an updated estimate of the global prevalence of trachoma based on the most recent information available. A literature search of recent published and unpublished surveys in the 57 endemic countries was carried out: the result of surveys that used the WHO trachoma grading system and additional information from regional and country experts served as a basis to determine the prevalence of trachoma in each country. Population-based surveys provided recent information for 42 out of 57 endemic countries. 40.6 million people are estimated to be suffering from active trachoma, and 8.2 million are estimated to have trichiasis. The current estimate of prevalence of trachoma is lower than the previous WHO estimates: this can be explained by the success in implementing control strategy, by more accurate data, as well as by socio-economic development in endemic countries.

The magnitude and cost of global blindness: an increasing problem that can be alleviated.

Kevin Frick,  Allen Foster (2003)
To identify the potential effect on global economic productivity of successful interventions, that are planned as part of the "VISION 2020-right to sight" initiative. The initiative aims to eliminate avoidable blindness. This study used economic and epidemiologic modeling. Existing data and assumptions about blindness prevalence, national populations, gross domestic product (GDP) per capita, labor force participation, and unemployment rates were used to project the economic productivity loss associated with unaccommodated blindness. Without extra interventions, the global number of blind individuals would increase from 44 million in the year 2000 to 76 million in 2020. A successful VISION 2020 initiative would result in only 24 million blind in 2020 and lead to 429 million blind person-years avoided. A conservative estimate of the economic gain is $102 billion. The VISION 2020 initiative has the potential to increase global economic productivity.

Publisher ID: 10-PNTD-RA-1470R4
DOI: 10.1371/journal.pntd.0000979
PMC ID: 3050919
PubMed ID: 21408130
Copyright statement: Chen et al. This is an open-access article distributed under the terms of the Creative Commons Attribution License, which permits unrestricted use, distribution, and reproduction in any medium, provided the original author and source are credited.