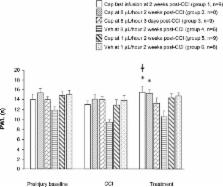 Capsaicin (150–300 μg/100–200 μL), when administered by fast infusion or chronic infusions at 8 μL/hour or 1 μL/hour, attenuated thermal hyperalgesia as indicated by significantly prolonging paw withdrawal latency to noxious thermal stimulation. The antinociceptive effect of capsaicin was more profound in the injured limb compared to that in the uninjured limb. When capsaicin was administered on the third day after nerve injury, it failed to attenuate thermal hyperalgesia. No significant effect on the mechanical response threshold was observed with intrathecally administered capsaicin.

Our data suggest that intrathecal capsaicin could significantly attenuate thermal hyperalgesia, depending on the time when the drug is given after nerve injury, and that the antinociceptive efficacy of intrathecal capsaicin positively correlates with the previously reported dynamic profile of spinal transient receptor potential vanilloid 1 activity after nerve injury.

Heather Bevan,  G Wotherspoon,  Ryan Gentry … (2001)
Changes in phenotype or connectivity of primary afferent neurons following peripheral nerve injury may contribute to the hyperalgesia and allodynia associated with neuropathic pain conditions. Although earlier studies using partial nerve injury models have focused on the role of damaged fibres in the generation of ectopic discharges and pain, it is now thought that remaining undamaged fibres may be equally important. We have examined the expression of the sensory neuron-specific cation channel Vanilloid Receptor 1 (VR1), an important transducer of noxious stimuli, in three models of nerve injury in the rat, using anatomical separation or fluorescent retrograde tracers to identify damaged or undamaged sensory neurons. After total or partial sciatic nerve transection, or spinal nerve ligation, VR1-immunoreactivity (IR) was significantly reduced in the somata of all damaged dorsal root ganglion (DRG) neuronal profiles, compared to controls. However, after partial transection or spinal nerve ligation, VR1 expression was greater in the undamaged DRG somata than in controls. Unexpectedly, after L5 spinal nerve ligation, VR1-IR of the A-fibre somata increased approximately 3-fold in the uninjured L4 DRG compared to controls; a much greater increase than seen in the somata with C-fibres. Furthermore, we found that VR1-IR persisted in the transected sciatic nerve proximal to the lesion, despite its down-regulation in the damaged neuronal somata. This persistence in the nerve proximal to the lesion after nerve section, together with increased VR1 in DRG neurons left undamaged after partial nerve injury, may be crucial to the development or maintenance of neuropathic pain.

Lumbar catheterization of the spinal subarachnoid space in the rat.

Rolf Størkson,  Anne Kjørsvik,  Arne Tjølsen … (1996)
The method commonly used for catheterization of the lumbar subarachnoid space in the rat implies inserting the catheter through the atlanto-occipital (A-O) membrane and moving the catheter caudally along the spinal cord. The method is associated with a considerable morbidity. A method for direct catheterization of the lumbar subarachnoid space was therefore developed. Major surgery was avoided by using a catheter-through-needle technique. Of 32 rats, none died. There were no signs of neurological disturbances, and all animals gained weight as normal the first week after implantation. Data from rats catheterized by the A-O method were used for comparison. Of 40 animals, 2 died, 11 showed signs of neurological disturbances, and the mean weight was reduced during the first week after catheterization. The two groups of animals showed different behavioural responses to intrathecal injection of N-methyl-D-aspartate (NMDA, 0.1-1.6 mM, 15 microliters) which is thought to stimulate afferent pathways mediating nociception. Animals with a lumbar catheter showed licking, biting and scratching behaviour in a dose-related manner for concentrations up to 1.6 mM. The animals with A-O catheters showed a maximum level of this behaviour already at 0.4 mM, while 0.5 mM induced convulsions. A possible explanation of this difference in response to NMDA could be a long-lasting pain state in the A-O group, caused by catheter-induced changes in the spinal cord and by the extensive surgery. It is concluded that the direct lumbar catheterization has several advantages compared to the A-O method, decreasing the suffering of the animals, the neurological disturbances and the interference with nociceptive functions of the spinal cord.