Longitudinal Changes of Handgrip, Knee Extensor Muscle Strength, and the Disability of the Arm, Shoulder and Hand Score in Cardiac Patients During Phase II Cardiac Rehabilitation 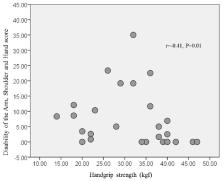 Exercise capacity and mortality among men referred for exercise testing.

Lindsey Hussey-Anderson,  David Thompson,  Neil Oldridge … (2016)
Coronary heart disease (CHD) is the single most common cause of death globally. However, with falling CHD mortality rates, an increasing number of people live with CHD and may need support to manage their symptoms and prognosis. Exercise-based cardiac rehabilitation (CR) aims to improve the health and outcomes of people with CHD. This is an update of a Cochrane systematic review previously published in 2011.