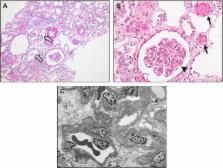 Hypertensive nephrosclerosis is usually associated with chronic hypertension, which increases the risk of progressive renal disease. Among the causes of malignant hypertension, thrombotic microangiopathy is complicated and is associated with renal dysfunction at the time of diagnosis. In this case, a young man with hypertension presented with renal failure and thrombocytopenia in the emergency department. This case emphasizes the importance of early recognition of renal failure and thrombocytopenia among patients with uncontrolled hypertension.

Association between blood pressure and the rate of decline in renal function with age.

Robert Lindeman,  Jordan Tobin,  Nathan Shock (1984)
A significant negative correlation (P less than 0.0001) exists between the mean blood pressure (MBP) and the rate of decline in creatinine clearance with time in years (BCr) in 446 subjects in the Baltimore Longitudinal Study on Aging (BLSA) followed serially on five or more visits over a period of 8 or more years. Even when the 118 subjects with possible renal and/or urinary tract pathology (category 1) and 74 subjects treated with diuretic and/or antihypertensive agents (category 2) were not included, this relationship remained in the 254 "normal" (category 3) subjects. Since both MBP and negativity of the BCr tend to increase with age, multiple regression analyses using both MBP and age as independent variables were performed to determine their respective influences on BCr. Both MBP and age significantly influenced BCr. When those subjects with hypertension (mean MBP greater than 107 mm Hg) were not included, however, the inverse relationship between MBP and BCr is lost, suggesting that an accelerated loss of renal function is observed primarily because of the impact exerted by individuals with blood pressures in the hypertensive range.

Alan G. S. Hill (2008)
Hypertensive nephrosclerosis is the second most common cause of end-stage renal disease, however morphologic evidence on the subject is poorly understood. A perennial and vexing problem in understanding kidney hypertension is that correlations between hypertension and vascular and glomerular lesions are only moderate, in part because all of these lesions are present to a greater or lesser degree in the normotensive, aging kidney, with racial differences in severity further compounding the problem. This review looks at newer data on this topic. Recent data suggest that there are two different processes leading to glomerulosclerosis, and the combination of the two begins to explain why global correlations between hypertension and morphologic lesions are destined to remain poor. Arterial stiffening with increased pulse pressure down as far as the afferent arteriolar level likely plays an important role in the progression of glomerular lesions. Loss of renal autoregulation with glomerular hypertrophy, hyperfiltration, and focal segmental glomerulosclerosis is now recognized to contribute significantly to nephrosclerosis, particularly in the black population. Ischemic glomerulosclerosis, however, may ultimately be the most important lesion, with consequent hypoxia in the parenchyma beyond, leading to tubular atrophy and interstitial fibrosis. Hypertensive nephrosclerosis should be seen as a process with two principal modes of glomerular sclerosis, ischemic and hypertrophic, with consequent focal segmental glomerulosclerosis, contributing variably to renal failure according to race and level of hypertension.

Johan N B van der Grient,  Charlotte H. B. S. van den Berg,  Richard Koopmans … (2005)
Renal dysfunction is an important cause of morbidity and mortality in patients with malignant hypertension. Microangiopathic hemolysis (MAHA) related to malignant hypertension may cause renal insufficiency by obstruction of interlobular arteries. We hypothesized that the presence of MAHA is an important indicator of renal dysfunction and recovery in malignant hypertension. We retrospectively analyzed 97 patients admitted between April 1994 and April 2004 with malignant hypertension. MAHA was defined as a low platelet count ( 220 U/L) or presence of schistocytes. MAHA was present in 26 of 97 patients (27%). Serum creatinine levels at admission were significantly higher in those with than in those without MAHA: median serum creatinine 690 micromol/L (interquartile range [IQR] 394 to 1105) and 120 micromol/L (IQR 82 to 211), respectively (P<0.01). Macroalbuminuria was present in 88% with versus 41% without MAHA (P<0.01). Patients with MAHA were more often black (73%; P<0.01) and had higher systolic blood pressure (mean 242 mm Hg versus 225 mm Hg; P<0.01). Dialysis was needed in 15 patients with MAHA (58%) versus 2 patients (3%) without MAHA. In 6 patients with MAHA, dialysis could be stopped. Cox regression analysis showed that MAHA and systolic blood pressure were the most important indicators of renal improvement during follow-up, with a hazard ratio of 0.24 (95% confidence interval [CI], 0.08 to 0.75; P=0.01) and 1.02 per mm Hg increase in systolic blood pressure (95% CI, 1.01 to 1.05; P=0.01). In conclusion, MAHA is an important indicator of renal insufficiency and recovery in patients with malignant hypertension.