Development of immunoassays for the detection of kanamycin in veterinary fields 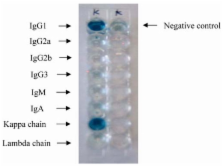 Monoclonal antibody against kanamycin was prepared, and competitive direct ELISA and immunochromatographic assay were developed using the antibody to detect kanamycin in animal plasma and milk. The monoclonal antibody produced was identified to be IgG1, which has a kappa light chain. No cross-reactivity of the antibody was detected with other aminoglycosides, indicating that the monoclonal antibody was highly specific for kanamycin. Based on competitive direct ELISA, the detection limits of kanamycin were determined to be 1.1 ng/ml in PBS, 1.4 ng/ml in plasma, and 1.0 ng/ml in milk. The concentration of intramuscularly injected kanamycin was successfully monitored in rabbit plasma with competitive direct ELISA. Based on the colloidal gold-based immunochromatographic assay, the detection limits of kanamycin were estimated to be about 6-8 ng/ml in PBS, plasma, and milk. The immunochromatographic assay would be suitable for rapid and simple screening of kanamycin residues in veterinary medicine. Screened positives can be confirmed using a more sensitive laboratory method such as competitive direct ELISA. Therefore, the assays developed in this study could be used to complement each other as well as other laboratory findings. Moreover, instead of slaughtering the animals to obtain test samples, these methods could be applied to determine kanamycin concentration in the plasma of live animals.

Rong-Hwa Shyu,  Huey-Fen Shyu,  Hwan-Wun Liu … (2002)
A rapid immunochromatographic assay was developed to detect ricin. The assay was based on the sandwich format using monoclonal antibodies (Mabs) of two distinct specificities. One anti-ricin B chain Mab (1G7) was immobilized to a defined detection zone on a porous nitrocellulose membrane, while the other anti-ricin A chain Mab (5E11) was conjugated to colloidal gold particles which served as a detection reagent. The ricin-containing sample was added to the membrane and allowed to react with Mab (5E11)-coated particles. The mixture was then passed along the porous membrane by capillary action past the Mab (1G7) in the detection zone, which will bind the particles that had ricin bound to their surface, giving a red color within this detection zone with an intensity proportional to ricin concentration. In the absence of ricin, no immunogold was bound to the solid-phase antibody. With this method, 50 ng/ml of ricin was detected in less than 10 min. The assay sensitivity can be increased by silver enhancement to 100 pg/ml.

Paromomycin binding induces a local conformational change in the A-site of 16 S rRNA.

D Fourmy,  S Yoshizawa,  Simon J. Puglisi (1998)
Aminoglycoside antibiotics that bind to ribosomal RNA in the aminoacyl-tRNA site (A-site) cause misreading of the genetic code and inhibit translocation. An A-site RNA oligonucleotide specifically binds to aminoglycoside antibiotics and the structure of the RNA-paromomycin complex was previously determined by nuclear magnetic resonance (NMR) spectroscopy. Here, the A-site RNA structure in its free form has been determined using heteronuclear NMR and compared to the structure of the paromomycin-RNA complex. As in the complex with paromomycin, the asymmetric internal loop is closed by a Watson-Crick base-pair (C1407.G1494) and by two non-canonical base-pairs (U1406.U1495, A1408.A1493). A1492 stacks below A1493 and is intercalated between the upper and lower stems. The comparison of the free and bound conformations of the RNA shows that two universally conserved residues of the A site of 16 S rRNA, A1492 and A1493, are displaced towards the minor groove of the RNA helix in presence of antibiotic. These changes in the RNA conformation place the N1 positions of A1492 and A1493 on the minor groove side of the A-site RNA and suggest a mechanism of action of aminoglycosides on translation. Copyright 1998 Academic Press Limited.

Immunochemical detection of aminoglycosides in milk and kidney.

A Lommen,  J Nouws,  G Cazemier … (1999)
In 1996, the European Union established provisional maximum residue limits (MRL) for gentamicin, neomycin, streptomycin and dihydrostreptomycin in milk and tissue (0.1-5 mg kg-1). For the detection of these four aminoglycosides, three enzyme linked immunosorbent assays (ELISA) for applications in milk and kidney were developed. The screening of defatted and diluted milk resulted in limits of determination (LDM) of < 0.01 mg l-1. Kidney samples were deproteinized with a trichloroacetic acid solution (3%) and after filtration and the addition of buffer, aliquots were used in the ELISA. The LDM of the four aminoglycosides in kidney were < 0.05 mg kg-1. The ELISA were found suitable for the semi-quantitative screening of milk and kidney for the presence of the four aminoglycosides far below the MRL levels. In randomly taken milk samples (n = 776) and in kidneys derived from healthy pigs (n = 124), the aminoglycoside residues found were far below their established MRL. In eight out of the 94 kidney samples obtained from diseased animals after emergency slaughter, aminoglycoside residues were above the MRL.