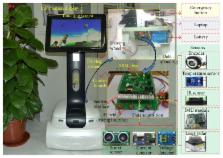 The wheeled robots have been successfully applied in many aspects, such as industrial handling vehicles, and wheeled service robots. To improve the safety and reliability of wheeled robots, this paper presents a novel hybrid fault diagnosis framework based on Mittag-Leffler kernel (ML-kernel) support vector machine (SVM) and Dempster-Shafer (D-S) fusion. Using sensor data sampled under different running conditions, the proposed approach initially establishes multiple principal component analysis (PCA) models for fault feature extraction. The fault feature vectors are then applied to train the probabilistic SVM (PSVM) classifiers that arrive at a preliminary fault diagnosis. To improve the accuracy of preliminary results, a novel ML-kernel based PSVM classifier is proposed in this paper, and the positive definiteness of the ML-kernel is proved as well. The basic probability assignments (BPAs) are defined based on the preliminary fault diagnosis results and their confidence values. Eventually, the final fault diagnosis result is archived by the fusion of the BPAs. Experimental results show that the proposed framework not only is capable of detecting and identifying the faults in the robot driving system, but also has better performance in stability and diagnosis accuracy compared with the traditional methods.

A comparison of methods for multiclass support vector machines.

Chih-Wei Hsu,  Chih-Jen Lin (2002)
Support vector machines (SVMs) were originally designed for binary classification. How to effectively extend it for multiclass classification is still an ongoing research issue. Several methods have been proposed where typically we construct a multiclass classifier by combining several binary classifiers. Some authors also proposed methods that consider all classes at once. As it is computationally more expensive to solve multiclass problems, comparisons of these methods using large-scale problems have not been seriously conducted. Especially for methods solving multiclass SVM in one step, a much larger optimization problem is required so up to now experiments are limited to small data sets. In this paper we give decomposition implementations for two such "all-together" methods. We then compare their performance with three methods based on binary classifications: "one-against-all," "one-against-one," and directed acyclic graph SVM (DAGSVM). Our experiments indicate that the "one-against-one" and DAG methods are more suitable for practical use than the other methods. Results also show that for large problems methods by considering all data at once in general need fewer support vectors.

The Nature of Statistical Learning Theory