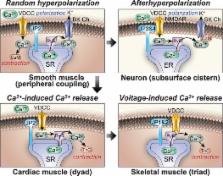 Donald M. Bers (2002)
Of the ions involved in the intricate workings of the heart, calcium is considered perhaps the most important. It is crucial to the very process that enables the chambers of the heart to contract and relax, a process called excitation-contraction coupling. It is important to understand in quantitative detail exactly how calcium is moved around the various organelles of the myocyte in order to bring about excitation-contraction coupling if we are to understand the basic physiology of heart function. Furthermore, spatial microdomains within the cell are important in localizing the molecular players that orchestrate cardiac function.

A signature pattern of stress-responsive microRNAs that can evoke cardiac hypertrophy and heart failure.

H. H. Williams,  Eric Olson,  Ning Liu … (2006)
Diverse forms of injury and stress evoke a hypertrophic growth response in adult cardiac myocytes, which is characterized by an increase in cell size, enhanced protein synthesis, assembly of sarcomeres, and reactivation of fetal genes, often culminating in heart failure and sudden death. Given the emerging roles of microRNAs (miRNAs) in modulation of cellular phenotypes, we searched for miRNAs that were regulated during cardiac hypertrophy and heart failure. We describe >12 miRNAs that are up- or down-regulated in cardiac tissue from mice in response to transverse aortic constriction or expression of activated calcineurin, stimuli that induce pathological cardiac remodeling. Many of these miRNAs were similarly regulated in failing human hearts. Forced overexpression of stress-inducible miRNAs was sufficient to induce hypertrophy in cultured cardiomyocytes. Similarly, cardiac overexpression of miR-195, which was up-regulated during cardiac hypertrophy, resulted in pathological cardiac growth and heart failure in transgenic mice. These findings reveal an important role for specific miRNAs in the control of hypertrophic growth and chamber remodeling of the heart in response to pathological signaling and point to miRNAs as potential therapeutic targets in heart disease.

M Iino,  H Takeshima,  M Nishi … (2000)
Junctional complexes between the plasma membrane (PM) and endoplasmic/sarcoplasmic reticulum (ER/ SR) are a common feature of all excitable cell types and mediate cross-talk between cell surface and intracellular ion channels. We have identified the junctophilins (JPs), a novel conserved family of proteins that are components of the junctional complexes. JPs are composed of a carboxy-terminal hydrophobic segment spanning the ER/SR membrane and a remaining cytoplasmic domain that shows specific affinity for the PM. In mouse, there are at least three JP subtypes: JP-1, -2, and -3. JP-2 is abundantly expressed in the heart, and mutant mice lacking JP-2 exhibited embryonic lethality. Cardiac myocytes from the mutant mice showed deficiency of the junctional membrane complexes and abnormal Ca2+ transients. Our results suggest that JPs are important components of junctional membrane complexes.