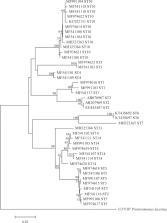 Blastocystis sp., a unicellular intestinal parasite in humans and animals worldwide, is frequently found in immunocompromized patients and people in close contact with animals. Here, we reviewed recent studies on the prevalence, subtypes, and distribution of Blastocystis infection in humans and animals in China. To date, more than 12 provinces have reported Blastocystis infection in humans, with identification of six different subtypes (ST1, ST2, ST3, ST4, ST5, and ST6). The overall infection rate reported was 3.37% (3625/107,695), with the lowest prevalence (0.80%) in Fujian province and the highest prevalence (100%) in Guangdong province. ST3 (62%, 186/300) was the most dominant subtype, identified in all tested provinces in China. A total of eight provinces have reported Blastocystis infection in various animals, with the overall prevalence being 24.66% (1202/4874). Molecular analysis revealed 14 subtypes that infected animals, including 10 known (ST1, ST2, ST3, ST4, ST5, ST6, ST7, ST10, ST13, ST14), and 4 novel (Novel1, Novel2, Novel3, Novel4) subtypes. ST5 was the dominant subtype infecting artiodactyls (44.1%, 460/1044), while ST1 commonly infected carnivores (45.5%, 5/11). These findings provide insights into the epidemiological behavior of Blastocystis sp. in China, and could help in developing effective control strategies against the parasite.

Kevin S W Tan (2008)
Blastocystis is an unusual enteric protozoan parasite of humans and many animals. It has a worldwide distribution and is often the most commonly isolated organism in parasitological surveys. The parasite has been described since the early 1900s, but only in the last decade or so have there been significant advances in our understanding of Blastocystis biology. However, the pleomorphic nature of the parasite and the lack of standardization in techniques have led to confusion and, in some cases, misinterpretation of data. This has hindered laboratory diagnosis and efforts to understand its mode of reproduction, life cycle, prevalence, and pathogenesis. Accumulating epidemiological, in vivo, and in vitro data strongly suggest that Blastocystis is a pathogen. Many genotypes exist in nature, and recent observations indicate that humans are, in reality, hosts to numerous zoonotic genotypes. Such genetic diversity has led to a suggestion that previously conflicting observations on the pathogenesis of Blastocystis are due to pathogenic and nonpathogenic genotypes. Recent epidemiological, animal infection, and in vitro host-Blastocystis interaction studies suggest that this may indeed be the case. This review focuses on such recent advances and also provides updates on laboratory and clinical aspects of Blastocystis spp.

Genetic diversity of blastocystis in livestock and zoo animals.

Kaitlin C Clark,  Mohammed A Alfellani,  Reeba Jacob … (2013)
Blastocystis is a common unicellular anaerobic eukaryote that inhabits the large intestine of many animals worldwide, including humans. The finding of Blastocystis in faeces in mammals and birds has led to proposals of zoonotic potential and that these hosts may be the source of many human infections. Blastocystis is, however, a genetically diverse complex of many distinct organisms (termed subtypes; STs), and sampling to date has been limited, both geographically and in the range of hosts studied. In order to expand our understanding of host specificity of Blastocystis STs, 557 samples were examined from various non-primate animal hosts and from a variety of different countries in Africa, Asia and Europe. STs were identified using 'barcoding' of the small subunit rRNA gene using DNA extracted either from culture or directly from faeces. The host and geographic range of several STs has thereby been greatly expanded and the evidence suggests that livestock is not a major contributor to human infection. Two new STs were detected among the barcode sequences obtained; for these, and for three others where the data were incomplete, the corresponding genes were fully sequenced and phylogenetic analysis was undertaken. Copyright © 2013 Elsevier GmbH. All rights reserved.

Subtype distribution of Blastocystis isolates from synanthropic and zoo animals and identification of a new subtype.

C Stensvold,  Emma L Victory,  Mohammed A Alfellani … (2009)
Blastocystis isolates from 56 Danish synanthropic and zoo animals, 62 primates primarily from United Kingdom (UK) collections and 16 UK primate handlers were subtyped by PCR, sequencing and phylogenetic analysis. A new subtype (ST) from primates and artiodactyls was identified and designated as Blastocystis sp. ST10. STs isolated from non-human primates (n=70) included ST3 (33%), ST8 (21%), ST2 (16%), ST5 (13%), ST1 (10%), ST4 (4%) and ST10 (3%). A high prevalence of ST8 was seen among primate handlers (25%). This ST is normally very rare in humans, suggesting that acquisition of Blastocystis ST8 infections from primates by their handlers had occurred in these cases. Data from published studies of non-human primates, other mammals and birds were collected and interpreted to generate a comprehensive overview on the ST distribution in such animals. On the basis of information on 438 samples, it was found that Blastocystis from primates belong mainly to ST1, ST2, ST3, ST5 and ST8, ungulates and dogs mainly ST1, ST2, ST3, ST5 and ST10, rodents ST4 and birds mainly ST6 and ST7. The data indicate moderate host specificity, most clearly exemplified by the fact that STs isolated from avian and non-avian hosts rarely overlap.