Role of the ECG in initial acute coronary syndrome triage: primary PCI regardless presence of ST elevation or of non-ST elevation 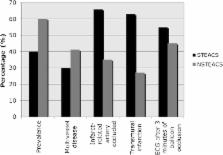 The major initial triaging decision in acute coronary syndrome (ACS) is whether or not percutaneous coronary intervention (PCI) is the primary treatment. Current guidelines recommend primary PCI in ST-elevation ACS (STEACS) and initial antithrombotic therapy in non-ST-elevation ACS (NSTEACS). This review probes the question whether this decision can indeed be based on the ECG. Genesis of STE/NSTE ECGs depends on the coronary anatomy, collateral circulation and site of the culprit lesion. Other causes than ischaemia may also result in ST-segment changes. It has been demonstrated that the area at risk cannot reliably be estimated by the magnitude of the ST change, that complete as well as incomplete occlusions can cause STE as well as NSTE ECGs, and that STE and NSTE patterns cannot differentiate between transmural and non-transmural ischaemia. Furthermore, unstable angina can occur with STE and NSTE ECGs. We conclude that the ECG can be used to assist in detecting ischaemia, but that electrocardiographic STE and NSTE patterns are not uniquely related to distinctly different pathophysiological mechanisms. Hence, in ACS, primary PCI might be considered regardless of the nature of the ST deviation, and it should be done with the shortest possible delay, because ‘time is muscle’.

Left ventricular end-systolic volume as the major determinant of survival after recovery from myocardial infarction.

H. D. White,  R Norris,  M. A. Brown … (1987)
Impairment of left ventricular function is the major predictor of mortality after acute myocardial infarction, but it is not known whether this is best described by ejection fraction or by end-systolic or end-diastolic volume. We measured volumes, ejection fractions, and severity of coronary arterial occlusions and stenoses in 605 male patients under 60 years of age at 1 to 2 months after a first (n = 443) or recurrent (n = 162) myocardial infarction and followed these patients for a mean of 78 months for survivors (range 15 to 165 months). There were 101 cardiac deaths, 71 (70%) of which were sudden (instantaneous or found dead). Multivariate analysis with log rank testing and the Cox proportional hazards model showed that end-systolic volume (chi 2 = 82.9) had greater predictive value for survival than end-diastolic volume (chi 2 = 59.0) or ejection fraction (chi 2 = 46.6), whereas stepwise analysis showed that once the relationship between survival and end-systolic volume had been fitted, there was no additional significant predictive information in either end-diastolic volume or ejection fraction. Severity of coronary occlusions and stenoses showed additional prediction of only borderline significance (p = .04 in one analysis), but continued cigarette smoking did remain an independent risk factor after stepwise analysis. For a subset of patients (n = 200) who had taken part in a randomized trial of coronary artery surgery after recovery from infarction, surgical "intention to treat" showed no predictive value.(ABSTRACT TRUNCATED AT 250 WORDS)