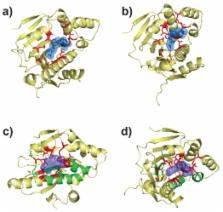 Three-dimensional structural information is critical for understanding functional protein properties and the precise mechanisms of protein functions implicated in physiological and pathological processes. Comparison and detection of protein binding sites are key steps for annotating structures with functional predictions and are extremely valuable steps in a drug design process. In this research area, MED-SuMo is a powerful technology to detect and characterize similar local regions on protein surfaces. Each amino acid residue’s potential chemical interactions are represented by specific surface chemical features (SCFs). The MED-SuMo heuristic is based on the representation of binding sites by a graph structure suitable for exploration by an efficient comparison algorithm. We use this approach to analyze one particular SCOP superfamily which includes HSP90 chaperone, MutL/DNA topoisomerase, histidine kinases, and α-ketoacid dehydrogenase kinase C (BCK). They share a common fold and a common region for ATP-binding. To analyze both similar and differing features of this fold, we use a novel classification method, the MED-SuMo multi approach (MED-SMA). We highlight common and distinct features of these proteins. The different clusters created by MED-SMA yield interesting observations. For instance, one cluster gathers three types of proteins (HSP90, topoisomerase VI, and BCK) which all bind the drug radicicol.

Data growth and its impact on the SCOP database: new developments

Antonina Andreeva,  Dave Howorth,  John-Marc Chandonia … (2008)
The Structural Classification of Proteins (SCOP) database is a comprehensive ordering of all proteins of known structure, according to their evolutionary and structural relationships. The SCOP hierarchy comprises the following levels: Species, Protein, Family, Superfamily, Fold and Class. While keeping the original classification scheme intact, we have changed the production of SCOP in order to cope with a rapid growth of new structural data and to facilitate the discovery of new protein relationships. We describe ongoing developments and new features implemented in SCOP. A new update protocol supports batch classification of new protein structures by their detected relationships at Family and Superfamily levels in contrast to our previous sequential handling of new structural data by release date. We introduce pre-SCOP, a preview of the SCOP developmental version that enables earlier access to the information on new relationships. We also discuss the impact of worldwide Structural Genomics initiatives, which are producing new protein structures at an increasing rate, on the rates of discovery and growth of protein families and superfamilies. SCOP can be accessed at http://scop.mrc-lmb.cam.ac.uk/scop.

Michael F. Cohen,  H. Bourne,  O Lichtarge (1996)
X-ray or NMR structures of proteins are often derived without their ligands, and even when the structure of a full complex is available, the area of contact that is functionally and energetically significant may be a specialized subset of the geometric interface deduced from the spatial proximity between ligands. Thus, even after a structure is solved, it remains a major theoretical and experimental goal to localize protein functional interfaces and understand the role of their constituent residues. The evolutionary trace method is a systematic, transparent and novel predictive technique that identifies active sites and functional interfaces in proteins with known structure. It is based on the extraction of functionally important residues from sequence conservation patterns in homologous proteins, and on their mapping onto the protein surface to generate clusters identifying functional interfaces. The SH2 and SH3 modular signaling domains and the DNA binding domain of the nuclear hormone receptors provide tests for the accuracy and validity of our method. In each case, the evolutionary trace delineates the functional epitope and identifies residues critical to binding specificity. Based on mutational evolutionary analysis and on the structural homology of protein families, this simple and versatile approach should help focus site-directed mutagenesis studies of structure-function relationships in macromolecules, as well as studies of specificity in molecular recognition. More generally, it provides an evolutionary perspective for judging the functional or structural role of each residue in protein structure.

James T. Porter,  Michael Bartlett,  J Thornton (2004)
The Catalytic Site Atlas (CSA) provides catalytic residue annotation for enzymes in the Protein Data Bank. It is available online at http://www.ebi.ac.uk/thornton-srv/databases/CSA. The database consists of two types of annotated site: an original hand-annotated set containing information extracted from the primary literature, using defined criteria to assign catalytic residues, and an additional homologous set, containing annotations inferred by PSI-BLAST and sequence alignment to one of the original set. The CSA can be queried via Swiss-Prot identifier and EC number, as well as by PDB code. CSA Version 1.0 contains 177 original hand- annotated entries and 2608 homologous entries, and covers approximately 30% of all EC numbers found in PDB. The CSA will be updated on a monthly basis to include homologous sites found in new PDBs, and new hand-annotated enzymes as and when their annotation is completed.