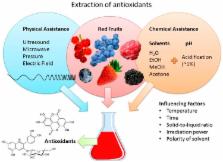 Red fruits, as rich antioxidant foods, have gained over recent years capital importance for consumers and manufacturers. The industrial extraction of the phenolic molecules from this source has been taking place with the conventional solvent extraction method. New non-conventional extraction methods have been devised as environmentally friendly alternatives to the former method, such as ultrasound, microwave, and pressure assisted extractions. The aim of this review is to compile the results of recent studies using different extraction methodologies, identify the red fruits with higher antioxidant activity, and give a global overview of the research trends regarding this topic. As the amount of data available is overwhelming, only results referring to berries are included, leaving aside other plant parts such as roots, stems, or even buds and flowers. Several researchers have drawn attention to the efficacy of non-conventional extraction methods, accomplishing similar or even better results using these new techniques. Some pilot-scale trials have been performed, corroborating the applicability of green alternative methods to the industrial scale. Blueberries ( Vaccinium corymbosum L.) and bilberries ( Vaccinium myrtillus L.) emerge as the berries with the highest antioxidant content and capacity. However, several new up and coming berries are gaining attention due to global availability and elevated anthocyanin content.

Assays for hydrophilic and lipophilic antioxidant capacity (oxygen radical absorbance capacity (ORAC(FL))) of plasma and other biological and food samples.

Licensee MDPI, Basel, Switzerland. This article is an open access article distributed under the terms and conditions of the Creative Commons Attribution (CC-BY) license (( http://creativecommons.org/licenses/by/4.0/).