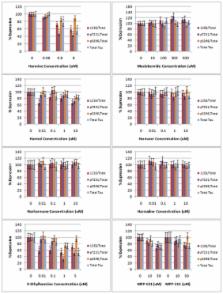 Eva-Maria Mandelkow, Bradley T. Hyman, Anja Schneider … (2001)
Microtubule associated protein tau is abnormally phosphorylated in Alzheimer's disease (AD) and aggregates as paired helical filaments (PHFs) in neurofibrillary tangles (NFTs). We show here that the pattern of tau phosphorylation correlates with the loss of neuronal integrity. Studies using 11 phosphorylation dependent tau antibodies and a panel of AD cases of varying severity were evaluated in terms of three stages of neurofibrillary tangle development: (1) pre-neurofibrillary tangle, (2) intra-, and (3) extra-neuronal neurofibrillary tangles. The pretangle state, in which neurons display nonfibrillar, punctate regions in the cytoplasm, sound dendrites, somas, and nuclei, was observed especially with phospho-tau antibodies TG3 (pT231), pS262, and pT153. Intraneuronal neurofibrillary tangles are homogenously stained with fibrillar tau structures, which were most prominently stained with pT175/181, 12E8 (pS262/pS356), pS422, pS46, pS214 antibodies. Extracellular NFTs, which contain substantial filamentous tau, are most prominently stained with AT8 (pS199/pS202/pT205), AT100 (pT212/pS214), and PHF-1 (pS396/pS404) antibodies, which also stain intracellular NFT. The sequence of early tau phosphorylation suggests that there are events prior to filament formation that are specific to particular phosphorylated tau epitopes, leading to conformational changes and cytopathological alterations.

DYRK1A-mediated hyperphosphorylation of Tau. A functional link between Down syndrome and Alzheimer disease.

Chinzorig Radnaabazar, Jee Jeong, Hye Sun Lee … (2007)
Most individuals with Down syndrome show early onset of Alzheimer disease (AD), resulting from the extra copy of chromosome 21. Located on this chromosome is a gene that encodes the dual specificity tyrosine phosphorylation-regulated kinase 1A (DYRK1A). One of the pathological hallmarks in AD is the presence of neurofibrillary tangles (NFTs), which are insoluble deposits that consist of abnormally hyperphosphorylated Tau. Previously it was reported that Tau at the Thr-212 residue was phosphorylated by Dyrk1A in vitro. To determine the physiological significance of this phosphorylation, an analysis was made of the amount of phospho-Thr-212-Tau (pT212) in the brains of transgenic mice that overexpress the human DYRK1A protein (DYRK1A TG mice) that we recently generated. A significant increase in the amount of pT212 was found in the brains of DYRK1A transgenic mice when compared with age-matched littermate controls. We further examined whether Dyrk1A phosphorylates other Tau residues that are implicated in NFTs. We found that Dyrk1A also phosphorylates Tau at Ser-202 and Ser-404 in vitro. Phosphorylation by Dyrk1A strongly inhibited the ability of Tau to promote microtubule assembly. Following this, using mammalian cells and DYRK1A TG mouse brains, it was demonstrated that the amounts of phospho-Ser-202-Tau and phospho-Ser-404-Tau are enhanced when DYRK1A amounts are high. These results provide the first in vivo evidence for a physiological role of DYRK1A in the hyperphosphorylation of Tau and suggest that the extra copy of the DYRK1A gene contributes to the early onset of AD.

The DYRK1A gene, encoded in chromosome 21 Down syndrome critical region, bridges between beta-amyloid production and tau phosphorylation in Alzheimer disease.

H Hattori, Hiroaki Kazui, M Yamamoto … (2007)
We scanned throughout chromosome 21 to assess genetic associations with late-onset Alzheimer disease (AD) using 374 Japanese patients and 375 population-based controls, because trisomy 21 is known to be associated with early deposition of beta-amyloid (Abeta) in the brain. Among 417 markers spanning 33 Mb, 22 markers showed associations with either the allele or the genotype frequency (P < 0.05). Logistic regression analysis with age, sex and apolipoprotein E (APOE)-epsilon4 dose supported genetic risk of 17 markers, of which eight markers were linked to the SAMSN1, PRSS7, NCAM2, RUNX1, DYRK1A and KCNJ6 genes. In logistic regression, the DYRK1A (dual-specificity tyrosine-regulated kinase 1A) gene, located in the Down syndrome critical region, showed the highest significance [OR = 2.99 (95% CI: 1.72-5.19), P = 0.001], whereas the RUNX1 gene showed a high odds ratio [OR = 23.3 (95% CI: 2.76-196.5), P = 0.038]. DYRK1A mRNA level in the hippocampus was significantly elevated in patients with AD when compared with pathological controls (P < 0.01). DYRK1A mRNA level was upregulated along with an increase in the Abeta-level in the brain of transgenic mice, overproducing Abeta at 9 months of age. In neuroblastoma cells, Abeta induced an increase in the DYRK1A transcript, which also led to tau phosphorylation at Thr212 under the overexpression of tau. Therefore, the upregulation of DYRK1A transcription results from Abeta loading, further leading to tau phosphorylation. Our result indicates that DYRK1A could be a key molecule bridging between beta-amyloid production and tau phosphorylation in AD.