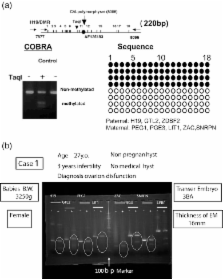 Oxygen consumption rates of human embryos derived from in vitro matured (IVM) oocytes and controlled ovarian hyperstimulation (COH) were compared with scanning electrochemical microscopy (SECM) non-invasively in order to answer why embryos from IVM oocytes have lower developmental potential. We also analyzed the epigenetic disorders for IVM babies born in our clinic.

The oxygen consumption rate was calculated with the SECM system for different maturation stages of human oocytes, IVM and COH embryos. Blood from umbilical cords of IVM babies was collected to examine the imprinting genes.

There were no significant differences in oxygen consumption of embryos at each cleavage stage between IVM and COH (range 0.26–0.56 × 10 14/mol S −1). There also was no abnormality found in expression of imprinting genes in IVM babies.

There are no differences in terms of oxygen consumption between embryos derived from IVM and COH. There was no imprinting gene disorder founded from IVM babies.

Akiko Sato,  Hisato Kobayashi,  Hitoshi Hiura … (2007)
Recent studies suggest that assisted reproductive technologies (ART), which involve the isolation, handling and culture of gametes and early embryos, are associated with an increased incidence of rare imprinting disorders. Major epigenetic events take place during this time and the process of ART may expose the epigenome to external influences, preventing the proper establishment and maintenance of genomic imprints. However, the risks of ART cannot be simply evaluated because the patients who receive ART may differ both demographically and genetically from the general population at reproductive age. In this study, we examined the DNA methylation status of seven imprinted genes using a combined bisulphite-PCR restriction analysis and sequencing technique on sperm DNA obtained from 97 infertile men. We found an abnormal paternal methylation imprint in 14 patients (14.4%) and abnormal maternal imprint in 20 patients (20.6%). The majority of these doubly defective samples were in men with moderate or severe oligospermia. These abnormalities were specific to imprinted loci as we found that global DNA methylation was normal in these samples. The outcome of ART with sperm shown to have an abnormal DNA methylation pattern was generally poor. However, one sample of sperm with both paternal and maternal methylation errors used in ICSI produced a child of normal appearance without any abnormalities in their imprinted methylation pattern. Our data suggest that sperm from infertile patients, especially those with oligospermia, may carry a higher risk of transmitting incorrect primary imprints to their offspring, highlighting the need for more research into ART.

James Segars,  Somjate Manipalviratn,  Alan DeCherney (2009)
To review currently available literature on the association between imprinting disorders (Beckwith-Wiedemann syndrome [BWS], Angelman syndrome [AS] and retinoblastoma) and assisted reproductive technology (ART) in humans. Publications related to imprinting/epigenetic disorders including BWS, AS, and retinoblastoma with ART, as well as articles publishing outcome of ART, including IVF and ICSI from July 1978 to February 2008, were identified using PubMed, Medline, and EMBASE. Considerable evidence in animal studies has demonstrated alteration in gene imprinting of embryos cultured in vitro. Publications from Europe, the United States, and Australia have suggested an association between ART and BWS. Importantly, more than 90% of children with BWS that were born after ART had imprinting defects, compared with 40%-50% of children with BWS and conceived without ART. Moreover, there have been other reports suggesting an association between AS and ART. The majority of children with AS born after ART had an imprinting defect as the underlying etiology, specifically loss of methylation of the maternal allele. There was a single report suggesting an increased incidence of retinoblastoma in children conceived with ART. Because the absolute incidence of imprinting disorders is small (<1:12,000 births), routine screening for imprinting disorders in children conceived by ART is not recommended. Additional large cohort studies of children born after ART are needed to determine whether there is a genuine association between ART and imprinting disorders.

Maturation in vitro of immature human oocytes for clinical use.

K Y Cha,  R.-C. Chian (2015)
Human oocyte maturation is considered as the reinitiation and completion of the first meiotic division from the germinal vesicle stage (prophase I) to metaphase II, and the accompanying cytoplasmic maturation for fertilization and early embryonic development. Immature human oocytes obtained from patients undergoing gynaecological surgery, or ovulation induction or having polycystic ovary syndrome (PCOS) can be matured and fertilized in vitro. To date, 80% of immature oocytes matured to metaphase II when cultured in maturation medium supplemented with gonadotrophins and 85% of matured oocytes fertilized and cleaved in vitro. Following transfer of these embryos, pregnancies and live births have been achieved. However, the capacity for oocyte maturation was different when the immature oocytes were retrieved from PCOS patients and when the oocytes were cryopreserved at germinal vesicle stage.