Sperm competition and the evolution of sperm design in mammals 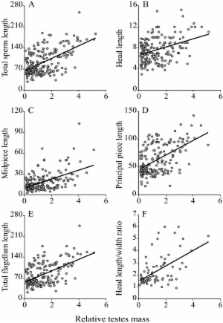 The influence of sperm competition upon sperm size has been a controversial issue during the last 20 years which remains unresolved for mammals. The hypothesis that, when ejaculates compete with rival males, an increase in sperm size would make sperm more competitive because it would increase sperm swimming speed, has generated contradictory results from both theoretical and empirical studies. In addition, the debate has extended to which sperm components should increase in size: the midpiece to accommodate more mitochondria and produce more energy to fuel motility, or the principal piece to generate greater propulsion forces.

In this study we examined the influence of sperm competition upon sperm design in mammals using a much larger data set (226 species) than in previous analyses, and we corrected for phylogenetic effects by using a more complete and resolved phylogeny, and more robust phylogenetic control methods. Our results show that, as sperm competition increases, all sperm components increase in an integrated manner and sperm heads become more elongated. The increase in sperm length was found to be associated with enhanced swimming velocity, an adaptive trait under sperm competition.

We conclude that sperm competition has played an important role in the evolution of sperm design in mammals, and discuss why previous studies have failed to detect it.

SPERM COMPETITION AND ITS EVOLUTIONARY CONSEQUENCES IN THE INSECTS

Sperm in competition: not playing by the numbers.

Rhonda Snook (2005)
The outcome of sperm competition is mediated largely by the relative numbers of sperm from competing males. However, substantial variation in features of sperm morphology and behaviour, such as length, longevity and motility, exists and researchers have suggested that this variation functions in postcopulatory sexual selection. Recent studies have determined the effect of these sperm-quality traits on fertilization success and a synthesis of this literature reveals that they are important in both sperm competition and cryptic female choice. To understand how postcopulatory sexual selection influences sperm traits, future research should determine sex-specific interactions that influence paternity, identify genetic correlations between ejaculate characters, quantify the relative costs of producing different sperm traits, and test assumptions of models of sperm quality evolution. Such research will shed light on what evolutionary pressures are responsible for the diversity in sperm morphometry and behaviour.