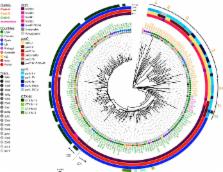 Escherichia coli ST131 is the most frequently isolated fluoroquinolone-resistant (FQR) E. coli clone worldwide and a major cause of urinary tract and bloodstream infections. Although originally identified through its association with the CTX-M-15 extended-spectrum β-lactamase resistance gene, global genomic epidemiology studies have failed to resolve the geographical and temporal origin of the ST131 ancestor. Here, we developed a framework for the reanalysis of publically available genomes from different countries and used this data set to reconstruct the evolutionary steps that led to the emergence of FQR ST131. Using Bayesian estimation, we show that point mutations in chromosomal genes that confer FQR coincide with the first clinical use of fluoroquinolone in 1986 and illustrate the impact of this pivotal event on the rapid population expansion of ST131 worldwide from an apparent origin in North America. Furthermore, we identify virulence factor acquisition events that predate the development of FQR, suggesting that the gain of virulence-associated genes followed by the tandem development of antibiotic resistance primed the successful global dissemination of ST131.

Escherichia coli sequence type 131 (ST131) is a recently emerged and globally disseminated multidrug-resistant clone frequently associated with human urinary tract and bloodstream infections. In this study, we have used two large publically available genomic data sets to define a number of critical steps in the evolution of this important pathogen. We show that resistance to fluoroquinolones, a class of broad-spectrum antibiotic used extensively in human medicine and veterinary practice, developed in ST131 soon after the introduction of these antibiotics in the United States, most likely in North America. We also mapped the acquisition of several fitness and virulence determinants by ST131 and demonstrate these events occurred prior to the development of fluoroquinolone resistance. Thus, ST131 has emerged by stealth, first acquiring genes associated with an increased capacity to cause human infection, and then gaining a resistance armory that has driven its massive population expansion across the globe.

Artemis and ACT: viewing, annotating and comparing sequences stored in a relational database

Tim Carver,  Matthew Berriman,  Adrian Tivey … (2008)
Motivation: Artemis and Artemis Comparison Tool (ACT) have become mainstream tools for viewing and annotating sequence data, particularly for microbial genomes. Since its first release, Artemis has been continuously developed and supported with additional functionality for editing and analysing sequences based on feedback from an active user community of laboratory biologists and professional annotators. Nevertheless, its utility has been somewhat restricted by its limitation to reading and writing from flat files. Therefore, a new version of Artemis has been developed, which reads from and writes to a relational database schema, and allows users to annotate more complex, often large and fragmented, genome sequences. Results: Artemis and ACT have now been extended to read and write directly to the Generic Model Organism Database (GMOD, http://www.gmod.org) Chado relational database schema. In addition, a Gene Builder tool has been developed to provide structured forms and tables to edit coordinates of gene models and edit functional annotation, based on standard ontologies, controlled vocabularies and free text. Availability: Artemis and ACT are freely available (under a GPL licence) for download (for MacOSX, UNIX and Windows) at the Wellcome Trust Sanger Institute web sites: http://www.sanger.ac.uk/Software/Artemis/ http://www.sanger.ac.uk/Software/ACT/ Contact: artemis@sanger.ac.uk Supplementary information: Supplementary data are available at Bioinformatics online.

Mark A. Schembri,  Elizabeth Skippington,  Nouri L. Ben Zakour … (2014)
Escherichia coli sequence type 131 (ST131) is a globally disseminated, multidrug resistant (MDR) clone responsible for a high proportion of urinary tract and bloodstream infections. The rapid emergence and successful spread of E. coli ST131 is strongly associated with several factors, including resistance to fluoroquinolones, high virulence gene content, the possession of the type 1 fimbriae FimH30 allele, and the production of the CTX-M-15 extended spectrum β-lactamase (ESBL). Here, we used genome sequencing to examine the molecular epidemiology of a collection of E. coli ST131 strains isolated from six distinct geographical locations across the world spanning 2000-2011. The global phylogeny of E. coli ST131, determined from whole-genome sequence data, revealed a single lineage of E. coli ST131 distinct from other extraintestinal E. coli strains within the B2 phylogroup. Three closely related E. coli ST131 sublineages were identified, with little association to geographic origin. The majority of single-nucleotide variants associated with each of the sublineages were due to recombination in regions adjacent to mobile genetic elements (MGEs). The most prevalent sublineage of ST131 strains was characterized by fluoroquinolone resistance, and a distinct virulence factor and MGE profile. Four different variants of the CTX-M ESBL-resistance gene were identified in our ST131 strains, with acquisition of CTX-M-15 representing a defining feature of a discrete but geographically dispersed ST131 sublineage. This study confirms the global dispersal of a single E. coli ST131 clone and demonstrates the role of MGEs and recombination in the evolution of this important MDR pathogen.

This article is a direct contribution from a Fellow of the American Academy of Microbiology. External solicited reviewers: Trinad Chakraborty, Universität Gießen; Swaine Chen, National University of Singapore.