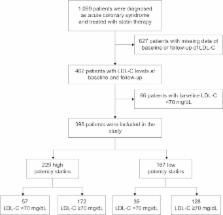 Elevated low-density lipoprotein cholesterol (LDL-C) is associated with an increased risk of coronary artery disease. Current guidelines recommend an LDL-C target of <70 mg/dL (<1.8 mmol/L) for acute coronary syndrome (ACS) patients, and the first-line treatment to lower lipids is statin therapy. Despite current guidelines and the efficacious lipid-lowering agents available, about half of patients at very high risk, including ACS patients, fail to achieve their LDL-C goal. This study assessed LDL-C goal attainment according to use of high and low potency statins in routine practice in Thailand.

A retrospective cohort study was performed by retrieving data from medical records and the electronic hospital database for a tertiary care hospital in Thailand between 2009 and 2011. Included were ACS patients treated with statins at baseline and with follow-up of LDL-C levels. Patients were divided into high or low potency statin users, and the proportion reaching the LDL-C goal of <70 mg/dL was determined. A Cox proportional hazard model was applied to determine the relationship between statin potency and LDL-C goal attainment. Propensity score adjustment was used to control for confounding by indication.

Pierre Théroux,  Peter Libby (2005)
During the past decade, our understanding of the pathophysiology of coronary artery disease (CAD) has undergone a remarkable evolution. We review here how these advances have altered our concepts of and clinical approaches to both the chronic and acute phases of CAD. Previously considered a cholesterol storage disease, we currently view atherosclerosis as an inflammatory disorder. The appreciation of arterial remodeling (compensatory enlargement) has expanded attention beyond stenoses evident by angiography to encompass the biology of nonstenotic plaques. Revascularization effectively relieves ischemia, but we now recognize the need to attend to nonobstructive lesions as well. Aggressive management of modifiable risk factors reduces cardiovascular events and should accompany appropriate revascularization. We now recognize that disruption of plaques that may not produce critical stenoses causes many acute coronary syndromes (ACS). The disrupted plaque represents a "solid-state" stimulus to thrombosis. Alterations in circulating prothrombotic or antifibrinolytic mediators in the "fluid phase" of the blood can also predispose toward ACS. Recent results have established the multiplicity of "high-risk" plaques and the widespread nature of inflammation in patients prone to develop ACS. These findings challenge our traditional view of coronary atherosclerosis as a segmental or localized disease. Thus, treatment of ACS should involve 2 overlapping phases: first, addressing the culprit lesion, and second, aiming at rapid "stabilization" of other plaques that may produce recurrent events. The concept of "interventional cardiology" must expand beyond mechanical revascularization to embrace preventive interventions that forestall future events.

Early intensive vs a delayed conservative simvastatin strategy in patients with acute coronary syndromes: phase Z of the A to Z trial.

Joanne Palmisano,  R Mukherjee,  Robert Califf … (2004)
Limited data are available evaluating how the timing and intensity of statin therapy following an acute coronary syndrome (ACS) event affect clinical outcome. To compare early initiation of an intensive statin regimen with delayed initiation of a less intensive regimen in patients with ACS. International, randomized, double-blind trial of patients with ACS receiving 40 mg/d of simvastatin for 1 month followed by 80 mg/d thereafter (n = 2265) compared with ACS patients receiving placebo for 4 months followed by 20 mg/d of simvastatin (n = 2232), who were enrolled in phase Z of the A to Z trial between December 29, 1999, and January 6, 2003. The primary end point was a composite of cardiovascular death, nonfatal myocardial infarction, readmission for ACS, and stroke. Follow-up was for at least 6 months and up to 24 months. Among the patients in the placebo plus simvastatin group, the median low-density lipoprotein (LDL) cholesterol level achieved while taking placebo was 122 mg/dL (3.16 mmol/L) at 1 month and was 77 mg/dL (1.99 mmol/L) at 8 months while taking 20 mg/d of simvastatin. Among the patients in the simvastatin only group, the median LDL cholesterol level achieved at 1 month while taking 40 mg/d of simvastatin was 68 mg/dL (1.76 mmol/L) and was 63 mg/dL (1.63 mmol/L) at 8 months while taking 80 mg/d of simvastatin. A total of 343 patients (16.7%) in the placebo plus simvastatin group experienced the primary end point compared with 309 (14.4%) in the simvastatin only group (40 mg/80 mg) (hazard ratio [HR], 0.89; 95% confidence interval [CI] 0.76-1.04; P =.14). Cardiovascular death occurred in 109 (5.4%) and 83 (4.1%) patients in the 2 groups (HR, 0.75; 95% CI, 0.57-1.00; P =.05) but no differences were observed in other individual components of the primary end point. No difference was evident during the first 4 months between the groups for the primary end point (HR, 1.01; 95% CI, 0.83-1.25; P =.89), but from 4 months through the end of the study the primary end point was significantly reduced in the simvastatin only group (HR, 0.75; 95% CI, 0.60-0.95; P =.02). Myopathy (creatine kinase >10 times the upper limit of normal associated with muscle symptoms) occurred in 9 patients (0.4%) receiving simvastatin 80 mg/d, in no patients receiving lower doses of simvastatin, and in 1 patient receiving placebo (P =.02). The trial did not achieve the prespecified end point. However, among patients with ACS, the early initiation of an aggressive simvastatin regimen resulted in a favorable trend toward reduction of major cardiovascular events.