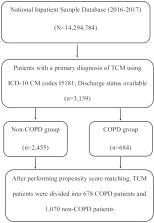 Chronic obstructive pulmonary disease (COPD) is a known comorbidity of takotsubo cardiomyopathy (TCM), and COPD exacerbation is a potential triggering factor of TCM. The association between COPD and in-hospital outcomes and complications among TCM patients is not well established. We sought to assess the effect of COPD on hospitalized patients with a primary diagnosis of TCM.

We conducted a retrospective cohort study in patients with a primary diagnosis of TCM with or without COPD using the latest National Inpatient Sample from 2016–2017. We identified 3139 patients admitted with a primary diagnosis of TCM by the ICD-10-CM coding system; 684 of those patients also had a diagnosis of COPD. We performed propensity score matching in a 1:2 ratio (n=678 patients, matched COPD group; n=1070, matched non-COPD group) and compared in-hospital outcomes and complications between TCM patients with and without a COPD diagnosis.

Patients with COPD who are hospitalized for TCM have higher rates of inpatient mortality, ARF, cardiogenic shock, as well as a longer LOS, and higher charges of stay than those without COPD. Prospective studies are warranted to examine the effect of early intervention or treatment of COPD on short- and long-term outcomes of TCM.

Romain Pauwels,  Klaus F Rabe (2015)
Chronic obstructive pulmonary disease (COPD) is a major cause of chronic morbidity and mortality and represents a substantial economic and social burden throughout the world. It is the fifth leading cause of death worldwide and further increases in its prevalence and mortality are expected in the coming decades. The substantial morbidity associated with COPD is often underestimated by health-care providers and patients; likewise, COPD is frequently underdiagnosed and undertreated. COPD develops earlier in life than is usually believed. Tobacco smoking is by far the major risk for COPD and the prevalence of the disease in different countries is related to rates of smoking and time of introduction of cigarette smoking. Contribution of occupational risk factors is quite small, but may vary depending on a country's level of economic development. Severe deficiency for alpha-1-antitrypsin is rare and the impact of other genetic factors on the prevalence of COPD has not been established. COPD should be considered in any patient presenting with cough, sputum production, or dyspnoea, especially if an exposure to risk factors for the disease has been present. Clinical diagnosis needs to be confirmed by standardised spirometric tests in the presence of not-fully-reversible airflow limitation. COPD is generally a progressive disease. Continued exposure to noxious agents promotes a more rapid decline in lung function and increases the risk for repeated exacerbations. Smoking cessation is the only intervention shown to slow the decline. If exposure is stopped, the disease may still progress due to the decline in lung function that normally occurs with aging, and some persistence of the inflammatory response.

Prevalence and Prognostic Impact of Diabetes in Takotsubo Syndrome: Insights From the International, Multicenter GEIST Registry.

Thomas Stiermaier,  Francesco Santoro,  Ibrahim El‐Battrawy … (2018)
In view of low prevalence rates, diabetes is discussed as a protective factor for the occurrence of Takotsubo syndrome (TTS). Furthermore, it was associated with improved outcome in a small single-center analysis. Therefore, this study assessed the prevalence and prognostic relevance of concomitant diabetes in TTS.