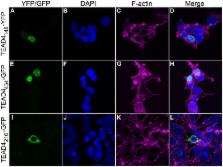 Increased cellular production of vascular endothelial growth factor (VEGF) is responsible for the development and progression of multiple cancers and other neovascular conditions, and therapies targeting post-translational VEGF products are used in the treatment of these diseases. Development of methods to control and modify the transcription of the VEGF gene is an alternative approach that may have therapeutic potential. We have previously shown that isoforms of the transcriptional enhancer factor 1-related (TEAD4) protein can enhance the production of VEGF. In this study we describe a new TEAD4 isoform, TEAD4 216, which represses VEGF promoter activity. The TEAD4 216 isoform inhibits human VEGF promoter activity and does not require the presence of the hypoxia responsive element (HRE), which is the sequence critical to hypoxia inducible factor (HIF)-mediated effects. The TEAD4 216 protein is localized to the cytoplasm, whereas the enhancer isoforms are found within the nucleus. The TEAD4 216 isoform can competitively repress the stimulatory activity of the TEAD4 434 and TEAD4 148 enhancers. Synthesis of the native VEGF 165 protein and cellular proliferation is suppressed by the TEAD4 216 isoform. Mutational analysis indicates that nuclear or cytoplasmic localization of any isoform determines whether it acts as an enhancer or repressor, respectively. The TEAD4 216 isoform appears to inhibit VEGF production independently of the HRE required activity by HIF, suggesting that this alternatively spliced isoform of TEAD4 may provide a novel approach to treat VEGF-dependent diseases.

J A Forsythe,  B H Jiang,  N V Iyer … (1996)
Expression of vascular endothelial growth factor (VEGF) is induced in cells exposed to hypoxia or ischemia. Neovascularization stimulated by VEGF occurs in several important clinical contexts, including myocardial ischemia, retinal disease, and tumor growth. Hypoxia-inducible factor 1 (HIF-1) is a heterodimeric basic helix-loop-helix protein that activates transcription of the human erythropoietin gene in hypoxic cells. Here we demonstrate the involvement of HIF-1 in the activation of VEGF transcription. VEGF 5'-flanking sequences mediated transcriptional activation of reporter gene expression in hypoxic Hep3B cells. A 47-bp sequence located 985 to 939 bp 5' to the VEGF transcription initiation site mediated hypoxia-inducible reporter gene expression directed by a simian virus 40 promoter element that was otherwise minimally responsive to hypoxia. When reporters containing VEGF sequences, in the context of the native VEGF or heterologous simian virus 40 promoter, were cotransfected with expression vectors encoding HIF-1alpha and HIF-1beta (ARNT [aryl hydrocarbon receptor nuclear translocator]), reporter gene transcription was much greater in both hypoxic and nonhypoxic cells than in cells transfected with the reporter alone. A HIF-1 binding site was demonstrated in the 47-bp hypoxia response element, and a 3-bp substitution eliminated the ability of the element to bind HIF-1 and to activate transcription in response to hypoxia and/or recombinant HIF-1. Cotransfection of cells with an expression vector encoding a dominant negative form of HIF-1alpha inhibited the activation of reporter transcription in hypoxic cells in a dose-dependent manner. VEGF mRNA was not induced by hypoxia in mutant cells that do not express the HIF-1beta (ARNT) subunit. These findings implicate HIF-1 in the activation of VEGF transcription in hypoxic cells.

Jindan Yu,  Siming Li,  Jianjun Yu … (2008)
The YAP transcription coactivator has been implicated as an oncogene and is amplified in human cancers. Recent studies have established that YAP is phosphorylated and inhibited by the Hippo tumor suppressor pathway. Here we demonstrate that the TEAD family transcription factors are essential in mediating YAP-dependent gene expression. TEAD is also required for YAP-induced cell growth, oncogenic transformation, and epithelial-mesenchymal transition. CTGF is identified as a direct YAP target gene important for cell growth. Moreover, the functional relationship between YAP and TEAD is conserved in Drosophila Yki (the YAP homolog) and Scalloped (the TEAD homolog). Our study reveals TEAD as a new component in the Hippo pathway playing essential roles in mediating biological functions of YAP.

Elucidation of a universal size-control mechanism in Drosophila and mammals.

Jixin Dong,  Georg Feldmann,  Jianbin Huang … (2007)
Coordination of cell proliferation and cell death is essential to attain proper organ size during development and for maintaining tissue homeostasis throughout postnatal life. In Drosophila, these two processes are orchestrated by the Hippo kinase cascade, a growth-suppressive pathway that ultimately antagonizes the transcriptional coactivator Yorkie (Yki). Here we demonstrate that a single phosphorylation site in Yki mediates the growth-suppressive output of the Hippo pathway. Hippo-mediated phosphorylation inactivates Yki by excluding it from the nucleus, whereas loss of Hippo signaling leads to nuclear accumulation and therefore increased Yki activity. We further delineate a mammalian Hippo signaling pathway that culminates in the phosphorylation of YAP, the mammalian homolog of Yki. Using a conditional YAP transgenic mouse model, we demonstrate that the mammalian Hippo pathway is a potent regulator of organ size, and that its dysregulation leads to tumorigenesis. These results uncover a universal size-control mechanism in metazoan.