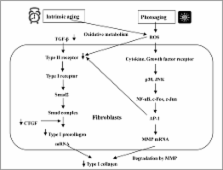 Skin is the most superficial body organ and plays an important role in protecting the body from environmental damage and in forming social relations. With the increase of the aging population in our society, dermatological and cosmetic concerns of skin aging are rapidly increasing. Skin aging is a complex process combined with intrinsic and extrinsic factors. Intrinsic or chronological skin aging results from the passage of time and is influenced by genetic factors. Extrinsic skin aging is mainly determined by UV irradiation, also called photoaging. These two types of aging processes are superimposed on sun-exposed skin, and have a common feature of causing dermal matrix alterations that mostly contribute to the formation of wrinkles, laxity, and fragility of aged skin. The dermal matrix contains extracellular matrix proteins such as collagen, elastin, and proteoglycans that confer the strength and resiliency of skin. Skin aging associated with dermal matrix alterations and atrophy can be caused by cellular senescence of dermal cells like fibroblasts, and decreased synthesis and accelerated degradation of dermal matrix components, especially collagen fibers. Both intrinsic aging and photoaging exert influence during each step of dermal matrix alteration via different mechanisms. Mouse models of skin aging have been extensively developed to elucidate intrinsic aging and photoaging processes, to validate in vitro biochemical data, and to test the effects of pharmacological tools for retarding skin aging because they have the advantages of being genetically similar to humans and are easily available.

Harbaljit Sohal,  R Weindruch (1996)
Under normal physiological conditions, the use of oxygen by cells of aerobic organisms generates potentially deleterious reactive oxygen metabolites. A chronic state of oxidative stress exists in cells because of an imbalance between prooxidants and antioxidants. The amount of oxidative damage increases as an organism ages and is postulated to be a major causal factor of senescence. Support for this hypothesis includes the following observations: (i) Overexpression of antioxidative enzymes retards the age-related accrual of oxidative damage and extends the maximum life-span of transgenic Drosophila melanogaster. (ii) Variations in longevity among different species inversely correlate with the rates of mitochondrial generation of the superoxide anion radical (O2) and hydrogen peroxide. (iii) Restriction of caloric intake lowers steady-state levels of oxidative stress and damage, retards age-associated changes, and extends the maximum life-span in mammals.

E YoungLai,  Carol Greider,  Rebecca Allsopp … (1992)
When human fibroblasts from different donors are grown in vitro, only a small fraction of the variation in their finite replicative capacity is explained by the chronological age of the donor. Because we had previously shown that telomeres, the terminal guanine-rich sequences of chromosomes, shorten throughout the life-span of cultured cells, we wished to determine whether variation in initial telomere length would account for the unexplained variation in replicative capacity. Analysis of cells from 31 donors (aged 0-93 yr) indicated relatively weak correlations between proliferative ability and donor age (m = -0.2 doubling per yr; r = -0.42; P = 0.02) and between telomeric DNA and donor age (m = -15 base pairs per yr; r = -0.43; P = 0.02). However, there was a striking correlation, valid over the entire age range of the donors, between replicative capacity and initial telomere length (m = 10 doublings per kilobase pair; r = 0.76; P = 0.004), indicating that cell strains with shorter telomeres underwent significantly fewer doublings than those with longer telomeres. These observations suggest that telomere length is a biomarker of somatic cell aging in humans and are consistent with a causal role for telomere loss in this process. We also found that fibroblasts from Hutchinson-Gilford progeria donors had short telomeres, consistent with their reduced division potential in vitro. In contrast, telomeres from sperm DNA did not decrease with age of the donor, suggesting that a mechanism for maintaining telomere length, such as telomerase expression, may be active in germ-line tissue.

Sewon Kang,  S Fligiel,  K. J. Voorhees … (2006)
Reduced synthesis of collagen types I and III is characteristic of chronologically aged skin. The present report provides evidence that both cellular fibroblast aging and defective mechanical stimulation in the aged tissue contribute to reduced collagen synthesis. The reduction in collagen synthesis due to fibroblast aging was demonstrated by a lower in vitro production of type I procollagen by dermal fibroblasts isolated from skin of young (18 to 29 years) versus old (80+ years) individuals (82 +/- 16 versus 56 +/- 8 ng/ml; P < 0.05). A reduction in mechanical stimulation in chronologically aged skin was inferred from morphological, ultrastructural, and fluorescence microscopic studies. These studies, comparing dermal sections from young and old individuals, demonstrated a greater percentage of the cell surface attached to collagen fibers (78 +/- 6 versus 58 +/- 8%; P < 0.01) and more extensive cell spreading (1.0 +/- 0.3 vs. 0.5 +/- 0.3; P < 0.05) in young skin compared with old skin. These features are consistent with a lower level of mechanical stimulation on the cells in old versus young skin. Based on the findings presented here, we conclude that reduced collagen synthesis in chronologically aged skin reflects at least two different underlying mechanisms: cellular fibroblast aging and a lower level of mechanical stimulation.