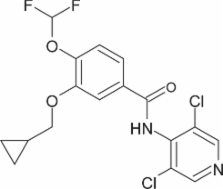 Chronic obstructive pulmonary disease is characterized by a rapid decline in lung function due to small airway fibrosis, mucus hypersecretion and emphysema. The major causative factor for COPD is cigarette smoking that drives an inflammatory process that gives rise to leukocyte recruitment, imbalance in protease levels and consequently matrix remodeling resulting in small airway fibrosis and loss of alveolar tissue. Current drug treatment improves symptoms but do not alter the underlying progression of this disease. The failure of anti-inflammatory drugs like glucocorticosteroids to have a major impact in this disease has hastened the need to develop novel therapeutic strategies. Phosphodiesterase (PDE)4 inhibitors are novel anti-inflammatory drugs that have recently been show to document clinical efficacy in this disease, although their utility is hampered by class related side-effects of nausea, emesis and diarrhea. Whilst it is not yet clear whether such drugs will prevent emphysema, this is a distinct possibility provided experimental observations from preclinical studies translate to man. This review will discuss the current standing of PDE4 inhibitors like roflumilast as novel treatments for COPD and the potential for developing nonemetic anti-inflammatory drugs.

Joshua S. Shapiro,  Peter Barnes,  R Pauwels (2003)
Chronic obstructive pulmonary disease is a leading cause of death and disability, but has only recently been extensively explored from a cellular and molecular perspective. There is a chronic inflammation that leads to fixed narrowing of small airways and alveolar wall destruction (emphysema). This is characterised by increased numbers of alveolar macrophages, neutrophils and cytotoxic T-lymphocytes, and the release of multiple inflammatory mediators (lipids, chemokines, cytokines, growth factors). A high level of oxidative stress may amplify this inflammation. There is also increased elastolysis and evidence for involvement of several elastolytic enzymes, including serine proteases, cathepsins and matrix metalloproteinases. The inflammation and proteolysis in chronic obstructive pulmonary disease is an amplification of the normal inflammatory response to cigarette smoke. This inflammation, in marked contrast to asthma, appears to be resistant to corticosteroids, prompting a search for novel anti-inflammatory therapies that may prevent the relentless progression of the disease.

James C Hogg (2015)
The airflow limitation that defines chronic obstructive pulmonary disease (COPD) is the result of a prolonged time constant for lung emptying, caused by increased resistance of the small conducting airways and increased compliance of the lung as a result of emphysematous destruction. These lesions are associated with a chronic innate and adaptive inflammatory immune response of the host to a lifetime exposure to inhaled toxic gases and particles. Processes contributing to obstruction in the small conducting airways include disruption of the epithelial barrier, interference with mucociliary clearance apparatus that results in accumulation of inflammatory mucous exudates in the small airway lumen, infiltration of the airway walls by inflammatory cells, and deposition of connective tissue in the airway wall. This remodelling and repair thickens the airway walls, reduces lumen calibre, and restricts the normal increase in calibre produced by lung inflation. Emphysematous lung destruction is associated with an infiltration of the same type of inflammatory cells found in the airways. The centrilobular pattern of emphysematous destruction is most closely associated with cigarette smoking, and although it is initially focused on respiratory bronchioles, separate lesions coalesce to destroy large volumes of lung tissue. The panacinar pattern of emphysema is characterised by a more even involvement of the acinus and is associated with alpha1 antitrypsin deficiency. The technology needed to diagnose and quantitate the individual small airway and emphysema phenotypes present in people with COPD is being developed, and should prove helpful in the assessment of therapeutic interventions designed to modify the progress of either phenotype.

Differences in interleukin-8 and tumor necrosis factor-alpha in induced sputum from patients with chronic obstructive pulmonary disease or asthma.

V Keatings,  Jennifer J. P. Collins,  Troy M. Scott … (1996)
Asthma and chronic obstructive pulmonary disease are characterized by chronic airway inflammation. Studies using bronchoalveolar lavage (BAL) have shown an increased proportion of eosinophils in the BAL fluid from asthmatics compared with that from normal subjects, whereas studies of chronic obstructive pulmonary disease (COPD) have shown increased numbers of neutrophils. Induced sputum allows sampling of respiratory tract secretions from patients and control subjects, providing a noninvasive method of studying airway secretions and allowing characterization of cells and measurement of soluble markers. We investigated whether induced sputum was a useful method of studying airway fluid from patients with moderate to severe COPD and whether it could be used to compare inflammation in this condition with that in asthma. An initial reproducibility study was undertaken. Sputum was induced twice in 13 patients with severe COPD at a 14-d interval. Total and differential cell counts were carried out and were found to be reproducible over this period. Sputum was then induced in 14 patients with COPD, 23 patients with asthma, 12 healthy cigarette smokers, and 16 normal nonsmoking control subjects. We found a significant increase in neutrophils and increased concentrations of tumor necrosis factor-alpha (TNF alpha) and interleukin-8 (IL-8) in the patients with COPD compared with the smoking and nonsmoking control subjects. Interleukin-8, but not TNF alpha, was significantly higher in the COPD group than in the asthmatic group. We conclude that the cytokines TNF alpha and IL-8 may be involved in the inflammation in COPD.